In my novel “A Diary in the Age of Water” (Inanna Publications) the diarist writes about the huge 800-km reservoir complex built in the late 2020s in the Rocky Mountain Trench to rehydrate the United States. Of course, it’s science fiction, but it was based on real plans that went all the way to Congress in the 1960s.

Snaking along the length of the Rocky Mountain Trench, the reservoir promised to submerge numerous British Columbia towns such as Dunster, McBride and Valemount and pose an existential threat to northern communities of BC and Alaska.

The Rocky Mountain Trench is a long and deep valley walled by sedimentary, volcanic and igneous rock that extends about 1,500 km from Flathead Lake in the Bitterroot Valley of northwest Montana through British Columbia to the Liard Plain just south of the Yukon Territory. Blanketed mostly by white and black spruce, subalpine fir and lodgepole pine, the northern trench stretches 3–20 km wide to accommodate the major river systems that snake along its mostly flat floor. This rich ecosystem is home to bears, caribou, moose and wolves. To the south, where the valley meanders more at lower elevation, the forest opens up and gives way to grasslands, marsh and farmland. The Trench is sometimes referred to as the “Valley of a Thousand Peaks” because of the towering mountain ranges on either side: the Rocky Mountains to the east and the Columbia, Omineca and Cassiar mountains to the west.

The Trench is a large fault—a crack in the Earth’s crust—and bordered along much of its length by smaller faults. Major structural features resulted from the shifting and thrusting of tectonic plates of the crust during the early Cenozoic Era, some 65 million years ago to form mountains. The ridges of fractured crust then pulled apart and the land in between dropped, creating the floor of the Trench. 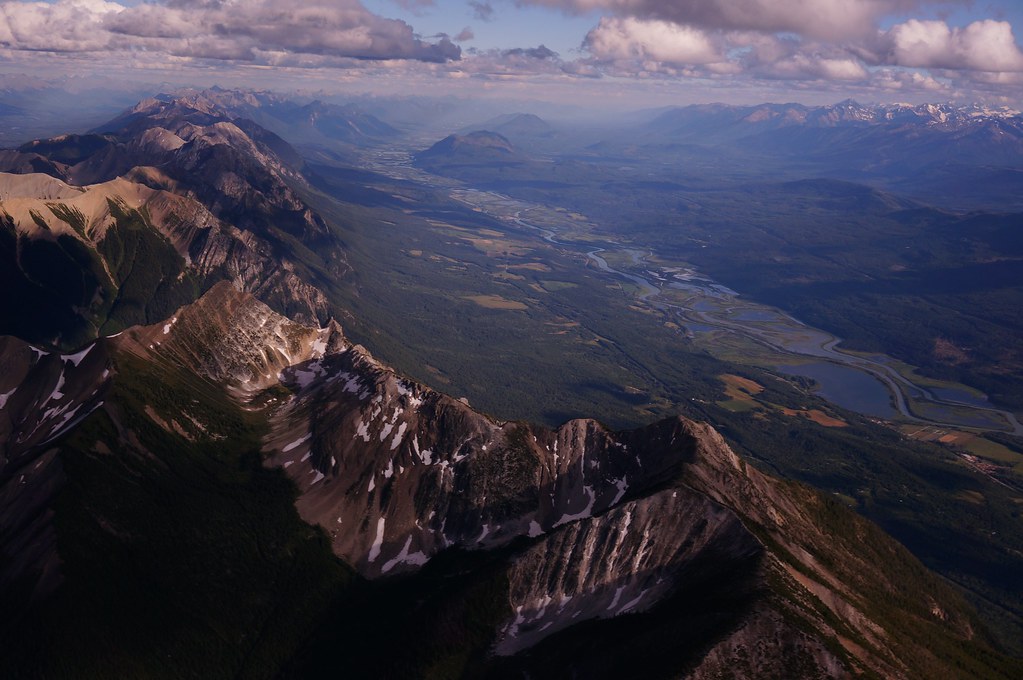 Among the major rivers that flow through the trench are the Fraser, Liard, Peace and Columbia rivers. Construction of hydroelectric projects—particularly those at Peace Canyon and Mica Dam—have disrupted the seven major rivers that once flowed through the Trench. All but the Fraser and Kechika rivers now empty into reservoirs on the valley floor; these include several reservoirs along the Columbia River in the southern trench such as the Kinbasket reservoir (created by the Mica Dam in 1973 to form Canoe Reach), and Revelstoke Lake (created by the Revelstoke Dam in 1984). Williston Lake was formed by the A.C. Bennet Dam on the Peace River in 1968. I had studied the effects of pulp mill activities for the federal government’s Environmental Effects Monitoring (EEM) Program.

Like pseudopods of a hunting amoeba, the Rocky Mountain Trench reservoir system would have sent tendrils of water up river arms, and drowned swaths of ancient oroboreal rainforest. The rainforest corridor of Robson Valley—a conservation area that continues to experience existential risk due to development, resource harvest, and other disturbance—would have been one of the many casualties.

Una stopped the car and we stared out across the longest reservoir in North America. What had once been a breathtaking view of the valley floor of the Rocky Mountain Trench was now a spectacular inland sea. It ran north-south over eight hundred kilometres and stretched several kilometres across to the foothills of the Cariboo Mountain Range. Una pointed to Mount Mica, Mount Pierre Elliot Trudeau and several other snow-covered peaks. They stood above the inland sea like sentinels of another time. Una then pointed down to what used to be Jackman Flats—mostly inundated along with McLellan River and the town of Valemont to the south. Hugging the shore of what was left of Jackman Flats was a tiny village. “That’s the new Tête Jaune Cache,” my mother told me.

If villages had karma this one was fated to drown over and over until it got it right.  Once a bustling trading town on the Grand Trunk Pacific railway, Tête Jaune Cache drowned in the early 1900s when the Fraser naturally flooded. The village relocated to the junction of the original Yellowhead 16 and 5 Highways. Villagers settled close to where the Fraser, Tête Creek, and the McLellan River joined, all fed by the meltwater from the glaciers and icefields of the Premiere Range of the Cariboo Mountains. The village drowned again in 2025. I imagined the pool halls, restaurants, saloons and trading posts crushed by the flood.

“This area used to be a prime Chinook spawning ground,” Una said. “They swam over 1,200 km from the Pacific Ocean to lay their eggs right there.” She pointed to the cobalt blue water below us. 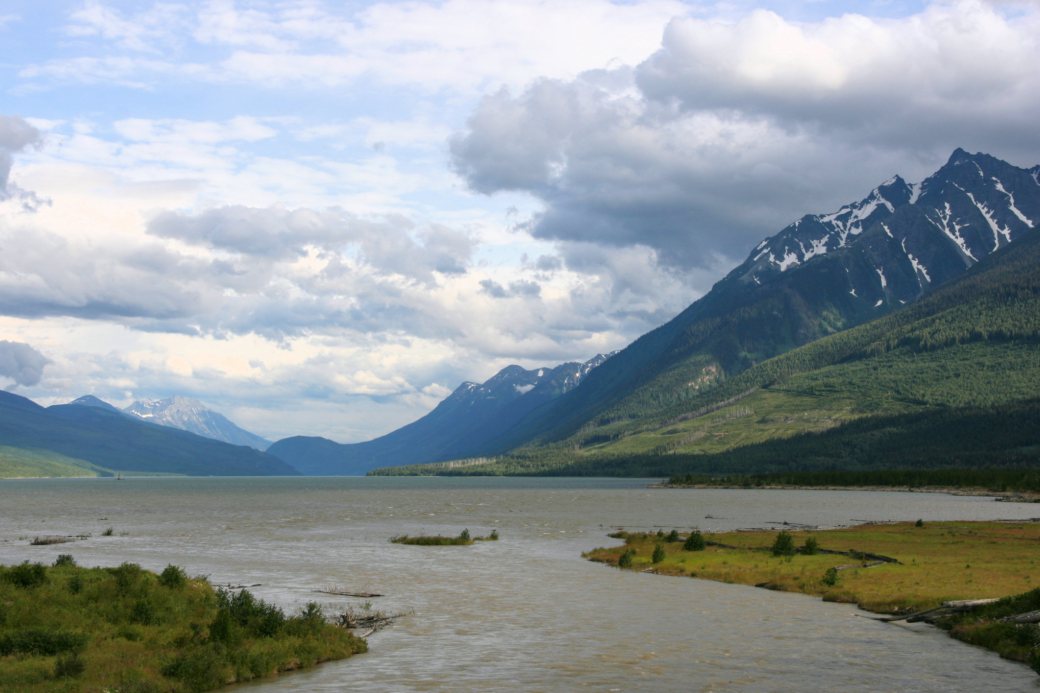 The reservoir sparkled in the sun like an ocean. Steep shores rose into majestic snow-capped mountains. The village lay in a kind of cruel paradise, I thought. It was surrounded by a multi-hued forest of Lodgepole pine, Western red cedar, Douglas fir, paper birch and trembling Aspen. Directly behind the village was Mount Terry Fox and across the Robson valley mouth, to the northeast, rose Mount Goslin. Behind it, Mount Robson cut a jagged pyramid against a stunning blue sky. Wispy clouds veiled its crown. I couldn’t help thinking it was the most beautiful place I’d seen. And yet, for all its beauty, the villagers had lost their principle livelihood and food. The reservoir had destroyed the wildlife habitats and the fishery. And its people with it.

Una pointed to where the giant reservoir snaked northwest and where towns like Croydon, Dunster, and McBride lay submerged beneath a silent wall of water. Her eyes suddenly misted as she told me about Slim Creek Provincial Park, between what used to be Slim and Driscoll Creeks just northwest of what used to be the community of Urling. She told me about the Oroboreal rainforest, called an “Antique Rainforest”—ancient cedar-hemlock stands over a 1000-years old. She described how massive trunks the width of a small house once rose straight up toward a kinder sun. The Primordial Grove was once home to bears, the gray wolf, cougar, lynx, wolverine and ungulates. It was the last valley in North America where the grizzly bear once fished ocean-going salmon. Now even the salmon were no longer there, she said. Then she bent low beside me and pulled me close to her in a hug. She quietly said to me, “This is what killed Trudeau.”

I stared at her and firmly corrected, “but that was an accident.”

—A Diary in the Age of Water

The original NAWAPA Plan was drawn up by the Pasadena-based firm of Ralph M. Parsons Co. in 1964, and had a favorable review by Congress for completion in the 1990s. The plan—thankfully never completed—was drafted by the US Army Corps of Engineers and entailed the southward diversion of a portion (if not all) of the Mackenzie and Yukon rivers in northern Canada and Alaska, now flowing into the Arctic Ocean as well as the Peace, Liard and other rivers flowing into the Pacific by creating massive dams in the north. This would cause the rivers to flow backwards into the mountains to form vast reservoirs that would flood one-tenth of British Columbia. The water would be channeled south through the 800-km Rocky Mountain Trench Reservoir into the Northern USA, and from there along various routes into the dry regions of the South, to California and reaching as far as Mexico.

NAWAPA was envisioned as the largest construction effort of all times, comprising some 369 separate projects of dams, canals, and tunnels, for water diversion. The water diversion would be accomplished through a series of connecting tunnels, canals, lakes, dams, and pump-lifts, as the trench itself is located at an elevation of 914 m (3,000 feet). To the east, a 9 m (thirty-foot) deep canal would be cut from the Peace River to Lake Superior. NAWAPA’s largest proposed dam would be 518 m (1,700 feet) tall, more than twice the height of Hoover Dam (at 221 m) and taller than any dam in the world today, including the Jinping-I Dam in China (at 305 m).

Conspiracy theorist and convicted fraudster Lyndon LaRouche was a principle proponent of the environmentally destructive NAWAPA plan. Although the plan was scrapped in the 1970s due to environmental concerns, it resurfaced in 1982 particularly by Parsons engineer Roland Kelley, who wrote a report called NAWAPA Plan Can Work. LaRouche and his movement revived interest more recently. In 2012 the LaRouche Political Action Committee released their NAWAPA XXI special report, which contained a detailed plan for the revival of an updated and expanded version of NAWAPA. The LaRouche movement continues to promote this outlandish plan today with support from various American politicians and industrialists.

In his book Cadillac Desert, environmental writer Marc Reisner described the plan as one of “brutal magnificence” and “unprecedented destructiveness.” Historian Ted Steinberg suggested that NAWAPA summed up “the sheer arrogance and imperial ambitions of the modern hydraulic West.” 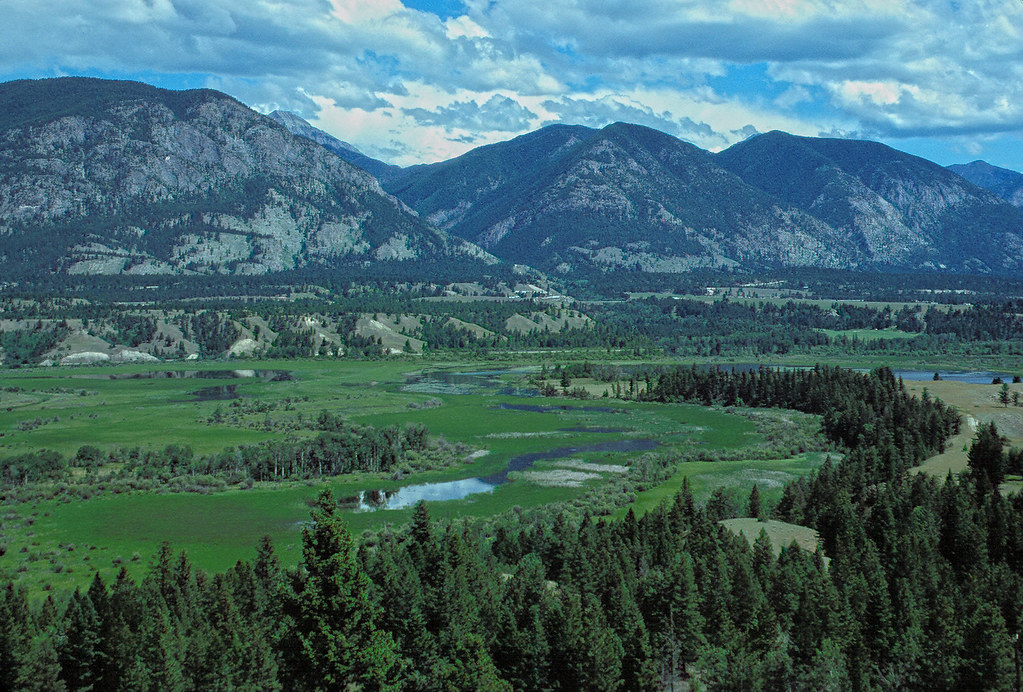 Nina Munteanu is a Canadian ecologist / limnologist and novelist. She is co-editor of Europa SF and currently teaches writing courses at George Brown College and the University of Toronto. Visit www.ninamunteanu.ca for the latest on her books. Nina’s bilingual “La natura dell’acqua / The Way of Water” was published by Mincione Edizioni in Rome. Her non-fiction book “Water Is…” by Pixl Press (Vancouver) was selected by Margaret Atwood in the New York Times ‘Year in Reading’ and was chosen as the 2017 Summer Read by Water Canada. Her novel “A Diary in the Age of Water” will be released by Inanna Publications (Toronto) in June 2020.

One thought on “A Diary in the Age of Water: The Rocky Mountain Trench Inland Sea”