Laura: Welcome to the studio, Rhea. We’re so pleased that you could take time out of your busy schedule to talk to us.

Rhea: Thank you. Well, my boss told me I had to come and then cleared my schedule.

Laura: Well, that was nice of him.

Laura: (clears throat). You’re an enforcer for the Iota Hor-2 Precinct. Is Neon City where you live—when you’re not out chasing the bad guys in your sentient ship, that is?

Rhea: Yes. I live in the eastside in a flat with my tappin, Jasper. I moved there when I started working for the Galactic Guardians. I’m originally from Earth: Vancouver, Canada.

Laura: How does it feel to be the only human in an entirely Eosian Guardian force?

Rhea: Small. Their average height is seven and a half feet. I’m tall for a human female at 6 feet, but I’m still a midget compared to them. Humans generally are small in the galaxy. If you discount the Delenians, Rills and Creons—which most do anyway—we’re pretty much the smallest sentient species in the galaxy.

Laura: (laughs uneasily) How did you become the only human Guardian Enforcer?

Laura: (shuffles papers uneasily). You must be one of their youngest Enforcers at just twenty-three years old. Most are in their forties by the time they earn an Enforcer badge. With so much training involved how did you accomplish that feat?

Rhea: I started out young.

Laura: So, tell us about your sentient ship. It’s different from the regulation Guardian ships, isn’t it? Why did you choose it—

Rhea: I didn’t choose Benny. But I’m very happy with him. Benny is a ray class ship, a hybrid of old organic nano-technology that uses brainwaves and new technology that uses kappa particles collected through fuel scoops from gas giants. My ship was built by Tangent Shipping, owned and operated by Fauche ship-builders. As far as I’m concerned, the Fauche are the best ship builders in the galaxy.

Laura: Tell us a little about the equipment you use in your work? Like that savory coat. You call it a Great Coat, don’t you? Is it standard Galactic Guardian issue?

Rhea: The coat is intelligent, made with thixotropic material, which protects me, alerts me and provides some enhancing features that help me maneuver out of challenging situations.

Rhea and her MEC

Laura: The standard weapon of the Galactic Guardian is the pocket pistol. But you use something different; I hear that you designed your own non-regulated weapon. Is that it, holstered on your hip? I’ve heard it called a MEC…

Rhea: (pulls out the hand gun). It stands for Magnetic-Electro-Concussion pistol. It’s a wave-generating weapon that’s programmable to specific vibrations and wavelengths unique to the DNA of animate and inanimate things. I can program it to do different things to different things in one sweep. This essentially makes the MEC a discerning weapon with distinguishable endpoints from rendering someone unconscious to a swift kill.

Laura: As a Galactic Enforcer, you’re known as a loner who drives a non-regulation ship and uses unconventional ways to complete your missions. Some have criticised your methods as unreliable, shoddy—even dangerous. One Galactic Enforcer told me that no one wants to work with you because—

Rhea: I didn’t join the force to make friends. I became a Guardian to help make things right. I get the job done. There’s no nice way of getting rid of scum, murderers, and terrorists. People have to decide if they want a safe galaxy or if they want to be politically correct in an unsafe one.

Laura: Does that include the Rill rebellion on Omicron 12 where you murdered over a hundred insurgent Rills with that very MEC you’re holding?

Rhea: ‘Talking without thinking is like shooting without aiming’—Old Chinese proverb… It was seventy-seven terrorists I killed.

Laura: (after tense pause in which interviewer notes that Rhea has not put away her MEC) Ok… Well… I heard a story from your mother—

Rhea: You spoke to my mother?

Laura: —that you wanted to be an artist when you were young…

Rhea: ‘Dress the monkey in silk and it is still a monkey.’ Argentinian proverb.

Laura: Eh… right… So, what’s your favourite holiday place when you take time off?

Rhea: I don’t take time off. Except for interviews my boss tells me I need to do, that is…

Laura: Eh… right… So, what’s your favourite drink—or drug— and favourite place to get it?

Rhea: (finally smiling) Well, I am rather partial to Plock Nectar but my favourite drink is soyka and one of the best places to get it is right here in Neon City. It’s a funky Italian-Scandi café on Elgin Street in The Hive, called The Muddy Pit.

Laura: Thank you, Rhea, for talking to us. I wish you well in your journeys.

Rhea: Thank you, Laura. You too.

Get the complete Splintered Universe Trilogy. Available in ALL THREE FORMATS: print, ebook, and audiobook. 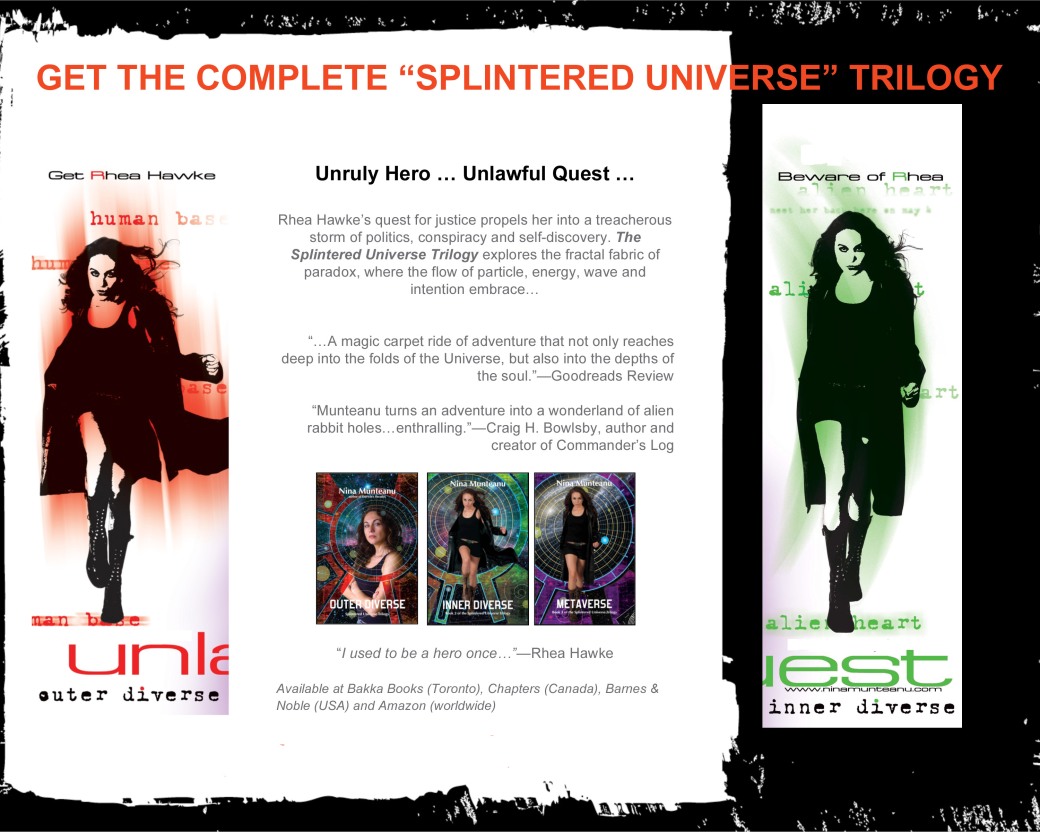 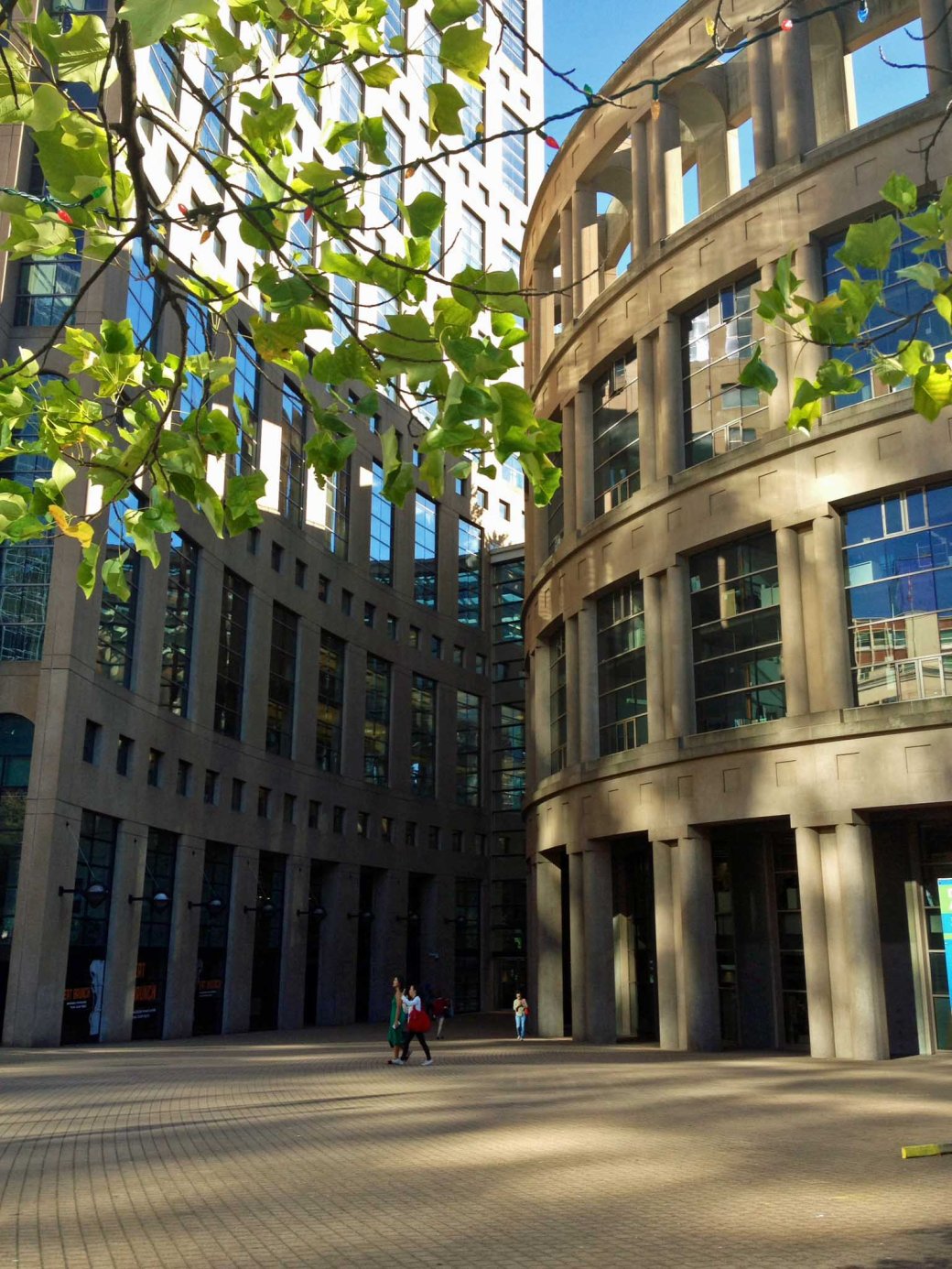 One thought on “Rhea Hawke Interviewed by Galaxy News”