Rhea Hawke on the cover of Outer Diverse

“Rhea Hawke…I want to be her when I grow up.”—Amazon Review

Something is changing for women—and for men too. I’m talking about storytelling—and what makes a hero. Only a few years ago, no one would have predicted the success of Wonder Woman, which portrays a well-rounded female hero as both “badass” warrior (strong, determined and violent) and kind (compassionate, nurturing, empathetic and inclusive).

The male hero stereotype of western neoliberal-corporate culture—and science fiction particularly—has often been characterized by strength, courage, honor, intelligence, and assertive single-mindedness. He is the altruist warrior, often acting alone against an unfair society: all traits honored, respected and esteemed in men. In a woman, these Boadicean qualities often taint her as “bitch”, “bossy”, “cold” or even heartless. She may be considered unwomanly, unlady-like, intimidating, and untouchable (as in lesbian).

In the patriarchal model, a woman “hero” must shed her feminine nurturing qualities of kindness, tenderness, and inclusion, to express those hero-defining qualities that are typically considered male. I have seen too many 2-dimensional female characters limited by their own stereotype in the science fiction genre—particularly in the adventure/thriller sub-genre. If they aren’t untouchable goddesses or “witches”, they are often delegated to enabling the “real hero” on his journey through their belief in him: as Trinity enables Neo; Hermione enables Harry; and Lois enables Superman. In so many of these storylines, the female—no matter how complex, interesting and tough she starts out being—demures to the male lead to support his hero’s journey—without considering her own. And this often means serving as the prize for his chivalry. There’s even a name for it: the Trinity Syndrome. 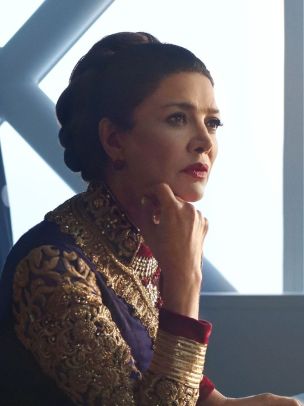 Avasarala (Shohreh Aghdashloo) in The Expanse

A different kind of hero is gaining momentum in science fiction and action-thrillers in which the heroic gifts of altruism, compassion, faith, courage, passion, and endurance drive the female lead. We see her in movies and TV shows like Edge of Tomorrow, Hunger Games, Divergence, Orphan Black, Farscape, Battlestar Galactica and The Expanse. Even Game of Thrones.

She fights the dragons of prejudice, ignorance, cruelty, greed and intolerance–either in partnership with her male counterpart or alone.

Enter Rhea Hawke, Galactic Guardian: wounded hero with a massive grudge. She’s the only human in a galactic police force of giant alien Eosians (who she despises). In the early scenes of Outer Diverse, Rhea is a “badass”; but she’s also far from heroic—displaying cynicism, open racism and even cruelty to her own colleagues. And yet, in her stubborn resolve to solve the massacre of a spiritual sect—even after she’s fired for killing her suspect—and to solve the mystery of the alien spectre of the Vos (who destroyed her home planet Earth), Rhea betrays a humane need to right all wrongs, including her own.

Rhea’s journey is large—epic, even. It’s a journey of transformation, both literally and figuratively. Her journey of self-discovery will take her across the galaxy, only to find that compassion and forgiveness were with her all along. She just needed to uncover them to find her whole self. Her sometimes foil and love-interest, Serge, continually bates her, challenges her and even betrays her. By turns a foil and an ally, Serge is Rhea’s perfect counterpart; not weaker or stronger, he is an equal to her. A true partner. And their banter is some of the most rewarding writing I’ve done in my career.