Because of the COVID19 pandemic, The 31st annual summer academy for learning was held virtually this year by New Horizons (of the World Genesis Foundation and United Nations Educational, Scientific and Cultural Organization).

Because of this, I was finally able to participate. Virtually and all the way from Canada. 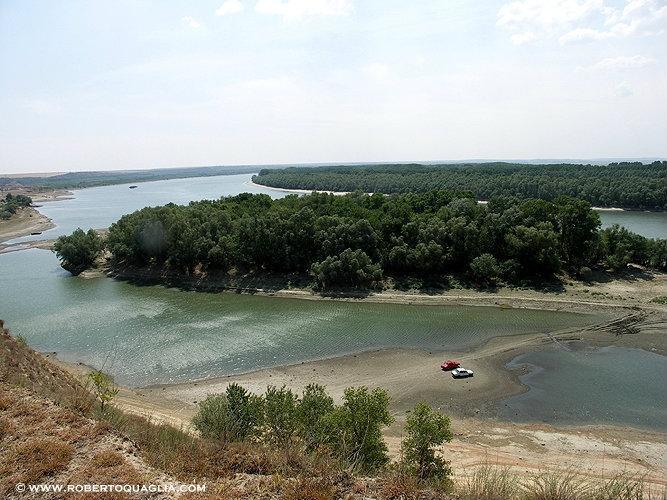 The international event is normally held on an island on the Danube River near the village and ancient Roman ruins of Capidava, Romania. First held in the summer of 1989, the event has attracted hundreds of youth and teachers from around the world to learn with scientists, artists, writers and other professionals in a wilderness setting.

Coordinated by Sorin Repanovici of the World Genesis Foundation and run by Dr. Florin Munteanu, Heather Caton-Anderson and Constantin D. Pavel, Atlantykron promotes UNESCO core goals of promoting sustainable development and creating dialogue and collaboration among nations in the areas of education, science, culture and communications.

Key presentations in the 2020 Atlantykron included: 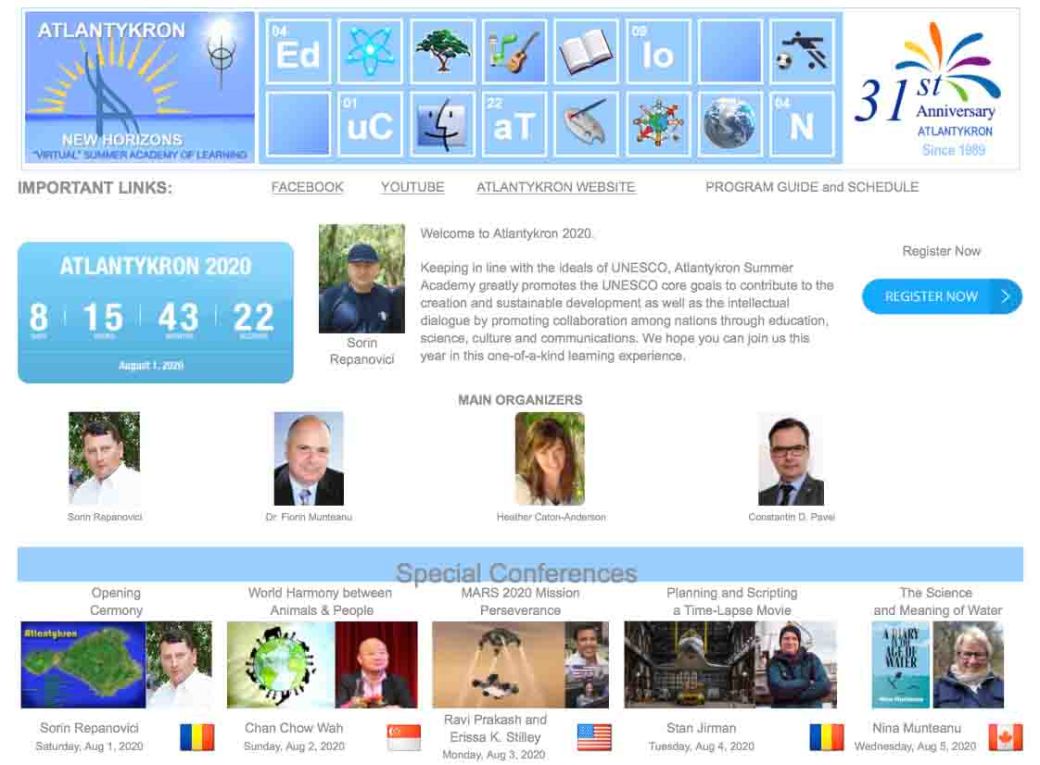 I’d met Florin Munteanu in 2012, when I went to Bucharest, Romania to participate in the launch of the Romanian translation of my book The Fiction Writer (Manual de Scriere Creativa: scriitorul de fictiune) with Editura Paralela 45 at the Gaudeamus Book Fair. Florin met me at the airport and took me to the Phoenicia Grand Hotel where I was staying. We had some coffee and pastries over a wonderful chat and he then coordinated a tour of the city for me with one of his students at the Centre of Complexity Studies where he taught.

When Florin invited me to speak at Atlantykron 2020, I was more than pleased. 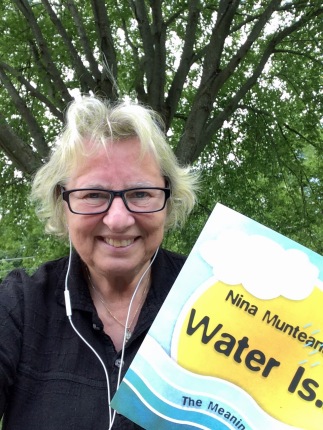 Nina with “Water Is…”

As a limnologist and with two major books on water published, I gave a talk on the science and meaning of water. Much of what I shared is in my book Water Is… The Meaning of Water, which provides 12 different angles on what water means—to different people from scientists and technologists to politicians, spiritualists and lay folk.

Water is so much more than the sum of its parts…

“Ultimately, water and our relationship with it is a curious gestalt of magic and paradox. Like the Suntelia Aion described by the Greeks, water cuts recursive patterns of creative destruction through the landscape, an ouroborous remembering. It changes, yet stays the same, shifting its face with the climate. It wanders the earth like a gypsy, stealing from where it is needed and giving whimsically where it isn’t wanted; aggressive yet yielding. Life-giving yet dangerous. Water is the well-spring of life. Yet it is the River Styx that leads the dead to Hades… Water is a shape shifter.”—Water Is…The Meaning of Water 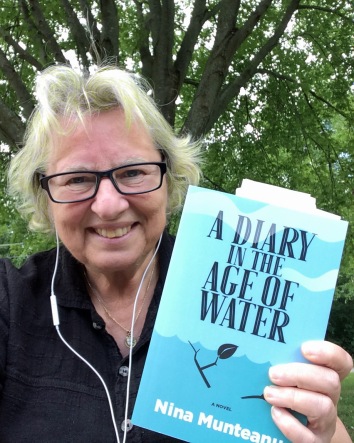 Nina with “A Diary in the Age of Water”

I overviewed some of water’s many anomalous qualities such as its unique density, cohesive, and adhesive properties—all life-giving. I discussed the water bridge, demonstrated by Dr. Elmar C. Fuchs and Professor Jakob Woisetchlager in 2007. I explored why water—particularly moving water—makes us feel so good (all those negative ions!). I went over the water cycle, water’s role in most natural cycles, and how it contributes to climate.

I then explored some of the oddest but most common tiny water residents. One example is the bdelloid rotifer—featured in my latest novel A Diary in the Age of Water—which is smaller than a millimeter, ubiquitous, lives wherever there is some water and can withstand desiccation, drying up into a dormant stage called a tun. Bdelloids create protective proteins, such as LEA, which act as a molecular shield. 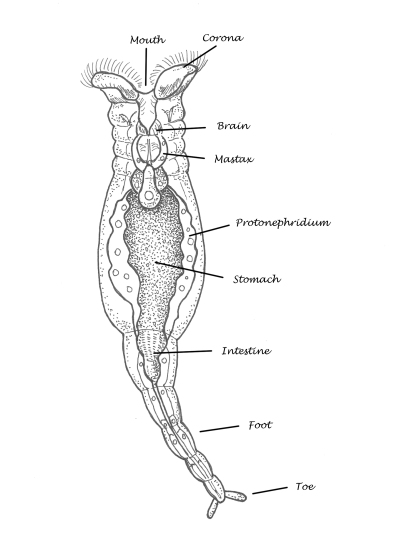 Sketch of a bdelloid rotifer (illustration by Nina Munteanu)

The bdelloid rotifer has existed for over forty million years. It reproduces through obligate parthenogenesis to produce all females, called thelytoky. Their long-term survival and evolutionary success in the absence of sex is largely a function of ecological adaptation that involves horizontal gene transfer through DNA repair. While they are patching up their broken genes from desiccation, they stitch in foreign DNA from the environment through horizontal gene transfer.

I ended the talk with some notes about conservation and stewardship of water. Using twelve-year old Rachel Parent and Greta Thunberg as examples, I stressed that no one is too young or too alone to make a difference; we then explored several activities that anyone could do. 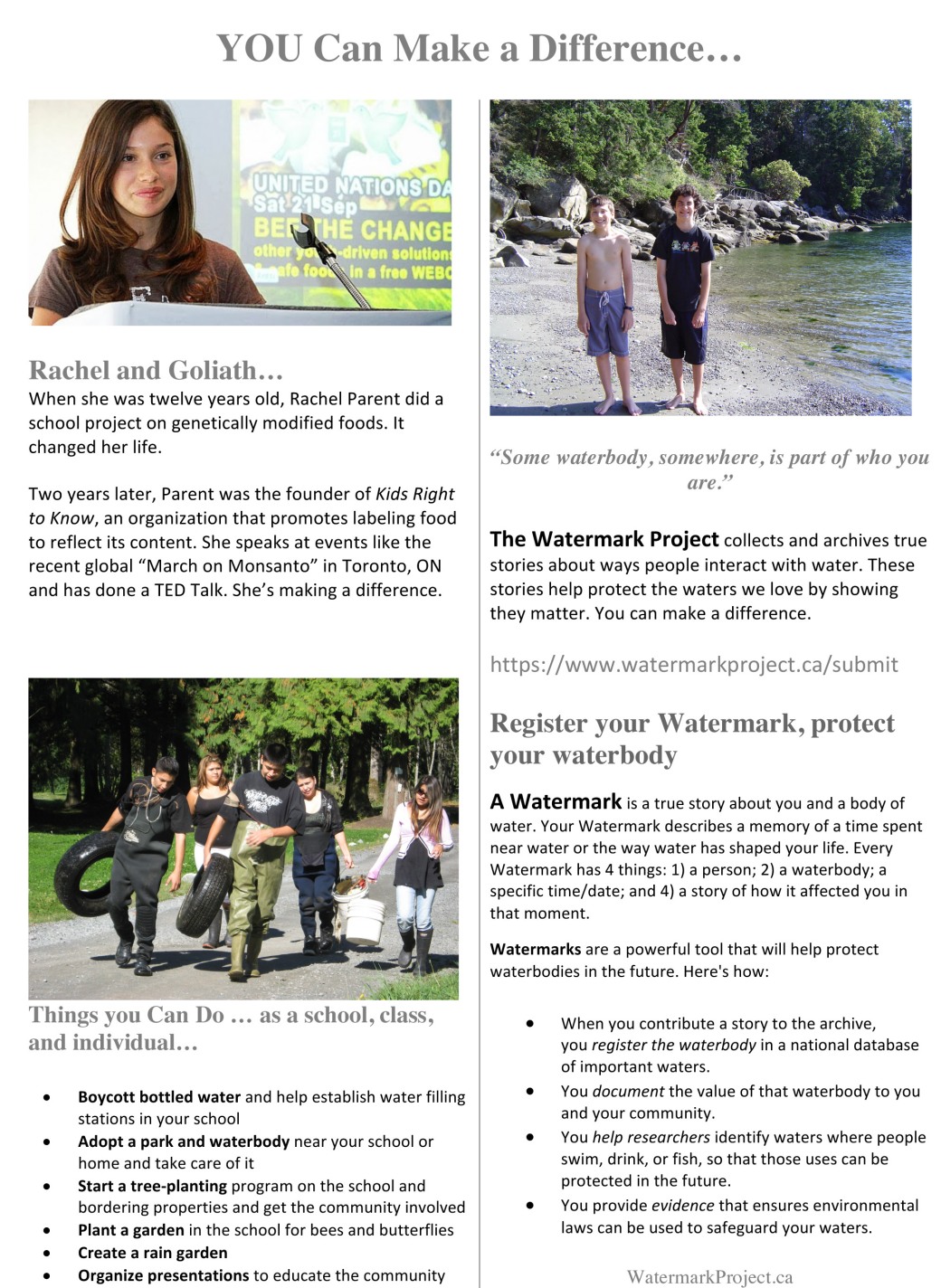 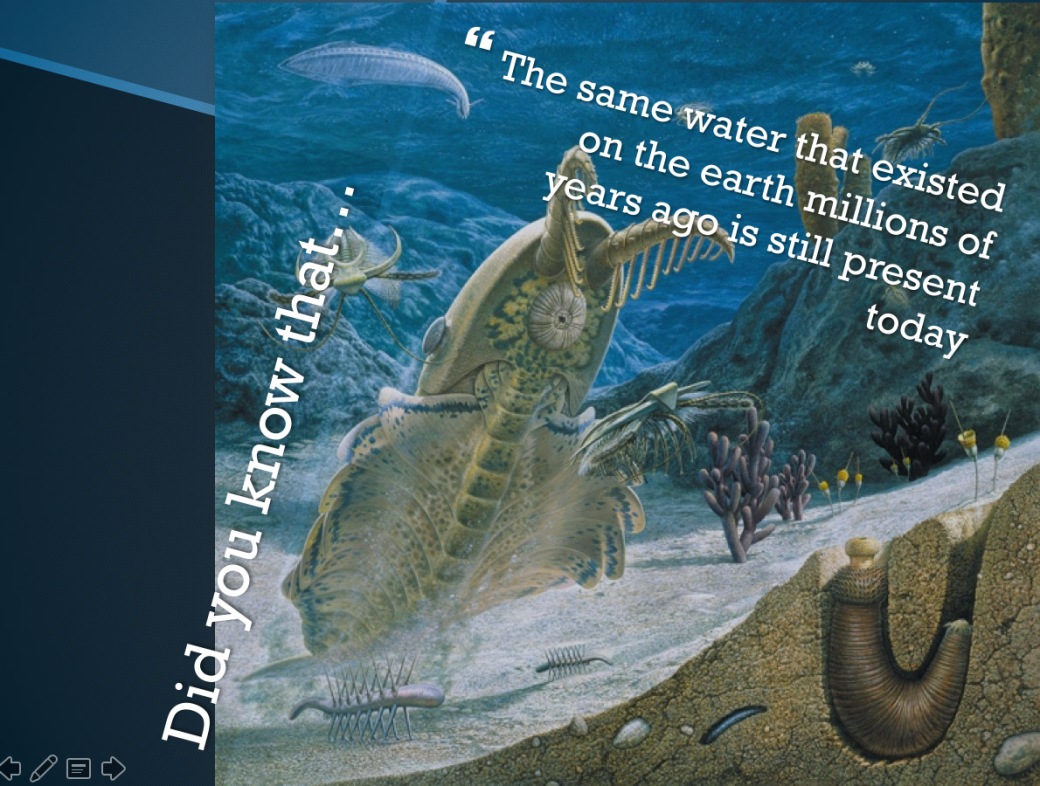 Nina Munteanu is a Canadian ecologist / limnologist and novelist. She is co-editor of Europa SF and currently teaches writing courses at George Brown College and the University of Toronto. Visit www.ninamunteanu.ca for the latest on her books. Nina’s bilingual “La natura dell’acqua / The Way of Water” was published by Mincione Edizioni in Rome. Her non-fiction book “Water Is…” by Pixl Press(Vancouver) was selected by Margaret Atwood in the New York Times ‘Year in Reading’ and was chosen as the 2017 Summer Read by Water Canada. Her novel “A Diary in the Age of Water” was released by Inanna Publications (Toronto) in June 2020.