In my recent novel A Diary in the Age of Water published by Inanna Publications Lynna, the diarist, talks with colleague Daniel about the increase in human infertility related to endocrine disruption. Daniel starts with a litany of reasons for human infertility:

“Scientists all agree that environmental factors are the main triggers for male and female infertility through epigenetics. The list of exposure triggers is endless. You know the main culprits: heavy metals, pesticides, PCBs, PAHs, VOCs, car exhaust, tobacco smoke … mostly chemicals with hormonal properties” Leaning on his microscope, Daniel went on, “Wherever there’s a sewage treatment plant, pulp and paper mill, or herbicides and pesticides in a stream, you get endocrine disruption, which causes more female or intersex fish populations. Then there’s nonylphenols—”

“—Degradation products of surfactants used in commercial and household detergents,” I ended for him and leaned against the doorway.

He nodded. “They inhibit breeding in male fish. And herbicides like atrazine—”

“—Create feminized males with female eggs, along with reduced immunity to disease,” I finished for him.

I knew all this. Hormonal disruption is global. Environmental toxicologists have been finding it in many aquatic animals like fish, turtles, alligators and frogs. And some terrestrial animals…Even humans…Was it also causing the steep rise in ambiguous sex in humans? Apparently 1 in 30 now have bodies that differ notably from standard male or female. Klinefelter, androgen insensitivity syndrome, presence of ovotestes, mixed gonadal dysgenesis, and mosaic genetics are all on the rise.

Daniel added, “The environment is changing us faster than most think and it’s doing it through epigenetics and HGT.”

Their discussion, which leads to something far more disastrous, is based on the reality of today. 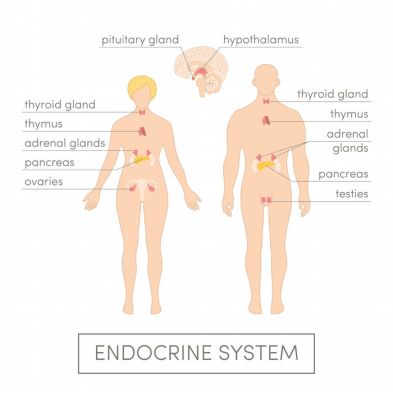 The endocrine system is a set of glands and the hormones they produce that help guide and regulate the development, growth, reproduction and behavior of most living things (yes plants too!). Some hormones are also released from parts of the body that aren’t glands, like the stomach, intestines or nerve cells. These usually act closer to where they are released. The endocrine system is made up of glands, which secrete hormones, and receptor cells which detect and react to the hormones. Hormones travel throughout the body, acting as chemical messengers, and interact with cells that contain matching receptors. The hormone binds with the receptor, like a key into a lock. Some chemicals, both natural and human-made, may interfere with the hormonal system. They’re called endocrine disruptors.

Endocrine (hormone) disruptors are substances that interfere with an organism’s endocrine system and disrupt the physiologic function of hormones. Studies have linked endocrine disruptors to adverse biological effects in animals, giving rise to valid concerns that low-level exposure can cause similar effects in human beings. 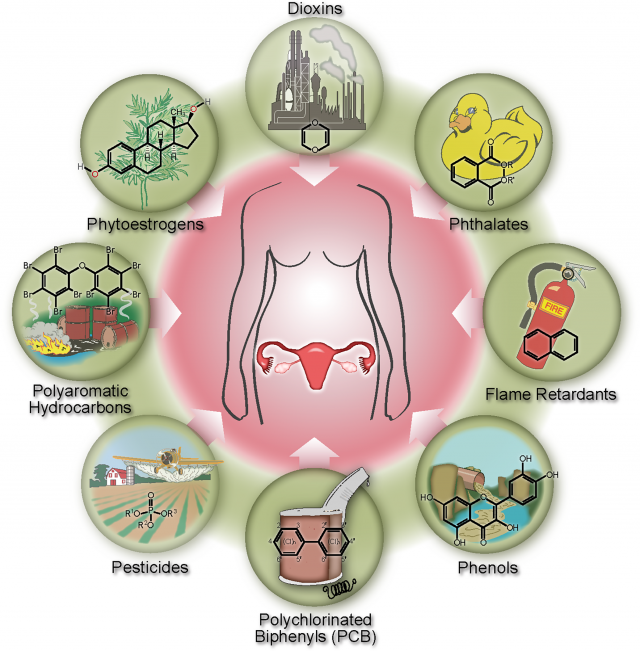 Disruption of the endocrine system via Endocrine Disrupting Chemicals (EDCs) or Hormone Disrupting Chemicals (HDCs) happens in different ways. Some chemicals mimic a natural hormone, fooling the body into over-responding to the stimulus, or responding at inappropriate times. Other endocrine disruptors curtail the effects of a hormone from certain receptors by blocking the receptor site on a cell. Still others directly stimulate or inhibit the endocrine system and cause overproduction or underproduction of hormones.

The effects of endocrine disruptors in humans include:

Some EDCs can also affect the development of the nervous and immune systems. Some well-known examples of EDCs include the contraceptive pill (17-alpha ethinylestradiol), dioxins, PCBs, PAHs, furans, phenols and several organic pesticides (most prominently DDT and its derivatives).

Sources for common EDCs in our daily lives are provided by Hormone Health Network in the table below:

Several chemicals have been found to disrupt the endocrine systems of animals in laboratory studies, and strong evidence exists that chemical exposure has been associated with adverse developmental and reproductive effects on fish and wildlife. The relationship of human diseases of the endocrine system and exposure to environmental contaminants, however, is still poorly understood (Kavlock et al., 1996, EPA, 1997).

One example of the devastating consequences of the exposure of developing animals, including humans, to endocrine disruptors is the case of the potent drug diethylstilbestrol (DES), a synthetic estrogen. Prior to its ban in the early 1970s, doctors mistakenly prescribed DES to as many as five million pregnant women to block spontaneous abortion and promote fetal growth. It was discovered after the children went through puberty that DES affected the development of the reproductive system and caused vaginal cancer. In addition to disruption of reproductive hormones, modulation of adrenal, thyroid and growth hormone function have also been described for various compounds in both humans and some animals, although the significance of these effects have not yet been fully determined.

Chemicals with affinities for estrogen receptors may cause lowered sperm count and other related reproductive abnormalities. Male fetuses exposed to high doses of estrogens may develop many female characteristics. Lower doses may alter the differentiation and multiplication of the germ cells that eventually give rise to sperm. Dr. John A. McLachlan, director of intramural research at the National Institute of Environmental Health Sciences noted that “some of the environmental chemicals that have estrogenic activity also seem to have a long half-life and can bioaccumulate” in the body’s fat tissue. Most endocrine disrupting chemicals are fat-soluble. This means that they do not get rapidly flushed out of the body, but are stored in fat. These chemicals bioaccumulate up the food chain. As a result, an individual will accumulate more of these chemicals throughout his/her lifetime. Major routes of removing these chemicals involve transfer from mother to child, through the placenta and in breast milk.

In 1992 researchers at Lake Apopka in Florida associated a declining alligator population with a depressed reproduction rate. Many of the male alligators had tiny penises that prevented successful reproduction. These developmental problems were connected to a large organochlorine pesticide spill several years earlier; although the water tested clean, the alligators and their eggs contained detectable levels of endocrine disrupting pesticides. 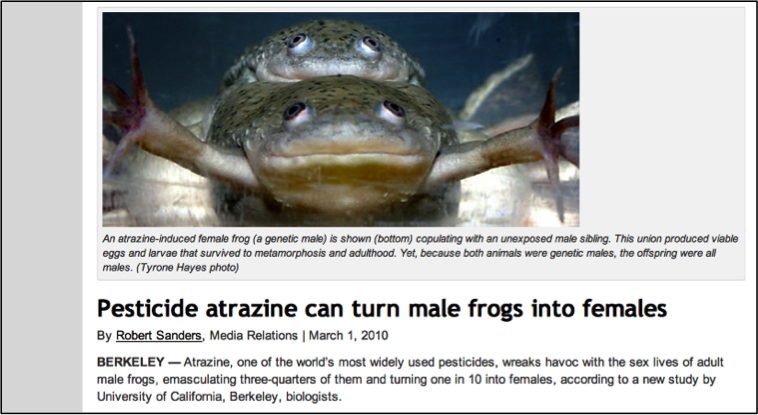 Fish in the Great Lakes, which are heavily contaminated with polychlorinated biphenyls (PCBs) and other organochlorines, exhibit numerous reproductive function problems and swelling of the thyroid gland. Fish-eating birds, such as eagles, terns, and gulls are also showing similar health effects, as are mink, a mammal that also eats fish from the Great Lakes. These findings are consistent with lab studies that indicate that PCBs interfere with thyroid function and with sex hormones.

The environment is a global entity that recognizes no political boundaries. Issuing a plea for wise action, the National Resources Defense Council state: “Dioxin from a paper mill in the US can accumulate within livestock that is exported to another country; water vapor carrying DDT (now banned in the US) from Mexico can be rained down in Minnesota. Individuals living near the North Pole, where DDT has never been used, have surprisingly high levels of it in their body fat. The laws that ban the production and use of specific chemicals in the United States do little to regulate against exposure via imported products from countries that allow the use of these chemicals.”

Given the common use of sources (in industry, agriculture and residential) that contain and distribute endocrine disruptive chemicals by the human population, and given their bioaccumulation in human tissue, I can practically guarantee that virtually all humans carry some endocrine disruptive chemical in their bodies. How much depends on your life style, where you live and work, your eating habits and your physiology.

More on A Diary in the Age of Water:

Nina Munteanu is a Canadian ecologist / limnologist and novelist. She is co-editor of Europa SF and currently teaches writing courses at George Brown College and the University of Toronto. Visit www.ninamunteanu.ca for the latest on her books. Nina’s bilingual “La natura dell’acqua / The Way of Water” was published by Mincione Edizioni in Rome. Her non-fiction book “Water Is…” by Pixl Press (Vancouver) was selected by Margaret Atwood in the New York Times ‘Year in Reading’ and was chosen as the 2017 Summer Read by Water Canada. Her novel “A Diary in the Age of Water” was released by Inanna Publications (Toronto) in June 2020.

2 thoughts on “Endocrine Disruption in The Age of Water”