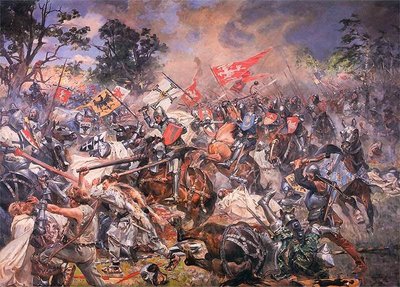 On this day, June 14th, every year, the Polish and Lithuanians celebrate the Battle of Grunwald; they celebrate with pride, erecting mock-ups of the battle to honour this important—yet largely unknown moment—in history: when the proud Teutonic Order fell to its knees and Poland became a nation. 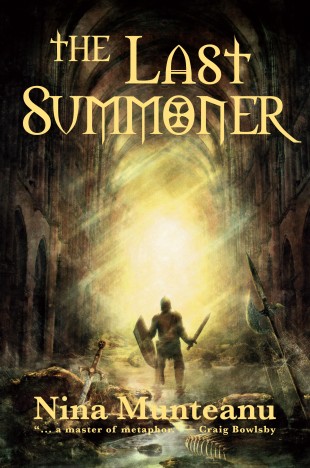 I teach writing at the University of Toronto and fiction writing at George Brown College in Toronto. A question I’m often asked is how I get my story ideas. I always start by sharing my favourite example of how I came to write my historical fantasy The Last Summoner:

It started in 2008, when I saw the most incredible image by Croation artist Tomislav Tikulin as I was browsing sites on the Internet. The image was of a magnificent knight, standing in a war-littered mire and gazing up, questioning, at the vaulted ceiling of a drowned cathedral. A great light shone upon the knight in streams of white gold–as if a message from heaven. It sent my imagination soaring with thoughts of chivalry, adventure and intrigue.

Who was this knight?

With that image imprinted inside me, the next nexus moment came when I stumbled across a significant but little-known battle in the medieval Baltic, the Battle of Grunwald. It would turn out to be the defining battle for what are now the countries of Poland and Lithuania. On June 14, 1410, they were still part of Prussia and tyrannized by the Teutonic Order, who were Christianizing the pagan Baltic on behalf of the Pope. In truth, the Order had been for centuries gathering wealth and land for colonizing Germans in their drang nach osten; they built sturdy castles (many of which still stand today) and grew into a force of monk warriors, feared for their cunning strategy and treacherous combat abilities.

The Battle of Grunwald was, in fact, an upset in history. The Teutonic Order was powerful, intimidating and extremely capable. They should have won; but the peasant armies of Prussia slaughtered the Order, killing most of its knights. Historians debate that the hochmeister’s arrogance—indeed the arrogance of the entire Order—precipitated their downfall. They underestimated their adversaries and got sloppy.

After the Polish and Lithuanian armies outsmarted the Order and slayed the Order’s hochmeister, along with many of their knights, the Order’s own peasant slaves finished the job using clubs, pitchforks and stones.

Every year, the Polish and Lithuanians celebrate June 14th with pride, erecting mock-ups of the battle.

Intrigued by this little known order of religious crusaders, I pursued the premise of an alternative consequence: what if the Teutonic Knights had NOT underestimated their enemy and won the Battle of Grunwald? Would they have continued their catastrophic sweep of Northeast Europe into Russia and beyond? Would they have claimed the whole for Germany’s expansionist lebensraum movement, fueled by its sonderweg—a dialectic that would ultimately lead to the killing fields of the Holocaust?  What if the success of the Teutonic Order helped consolidate a united fascist elite, ambitious to conquer the world? What if Nazism sprang up 100 years earlier than it did in our current reality?

The Last Summoner arose from this premise. Enter our hero, young 14-year old Vivianne Schoen, Baroness von Grunwald, a self-centred romantic who dreams that her ritter will rescue her from an arranged marriage to some foreign warrior. As a result of an impetuous choice, she makes the startling discovery that she can alter history—but not before she’s branded a witch and must flee through a time-space tear into an alternate present-day France—now ruled by fascists. There, she learns that every choice has its price.

Spanning from medieval Poland to present day Paris, The Last Summoner explores the sweeping consequences of our “subtle” choices. From the smallest grab to the most sweeping gesture, we are accountable for the world we’ve made. During her 600-year journey to save the world and undo the history she authored, Vivianne learns wisdom and humility. Through the paradox of history, she learns that what might have seemed the right choice for an immediate future, turns out to be disastrous for a distant future. To win is also to lose; to save oneself one must surrender oneself; and to save the world one need only save a single soul.

The knight standing in the drowned cathedral is none other than Vivianne.

Inspired by Tikulin’s knight depiction, I managed to convince my publisher at Starfire World Syndicate to purchase rights to the image; Tikulin’s image–Vivianne’s dream–became the actual cover of my book. I was overjoyed! When The Last Summoner hit the shelves in 2012, it quickly soared into an Amazon Canadian bestseller and remained in the top 10 for several months in the category of fantasy, historical fantasy and science fiction. The book continues to find new readers who enjoy the thrilling time-travelling journey of its 15th century heroine and its surprising plot.

“The Last Summoner is a blend of fantasy, history, and alternate history,” writes Canadian author Kristene Perron. “Fourteen year old Vivianne , the story’s hero, discovers that she has strange powers on the eve of the legendary Battle of Grunwald.  Marked as a witch, Vivianne escapes through time and space, but her actions change history and threaten to destroy the world.”

Kristene had chosen the book to review based on a description I had provided of the painting that inspired the novel created by artist Tomislav Tikulin.

The Last Summoner fascinated Kristene. “Ordinarily, historical fiction doesn’t excite me,” writes Kristene. “But the premise of this novel—which included a good dash of fantasy and time travel—was an exception. There is history aplenty and Munteanu has obviously done her homework. The world of 15th century Germany is authentically realized and the little touches of fantasy blend seamlessly.” She was pleased with Vivianne as a hero and how I had “endowed [my] protagonist with the skills and knowledge necessary for the plot without stretching plausibility.” 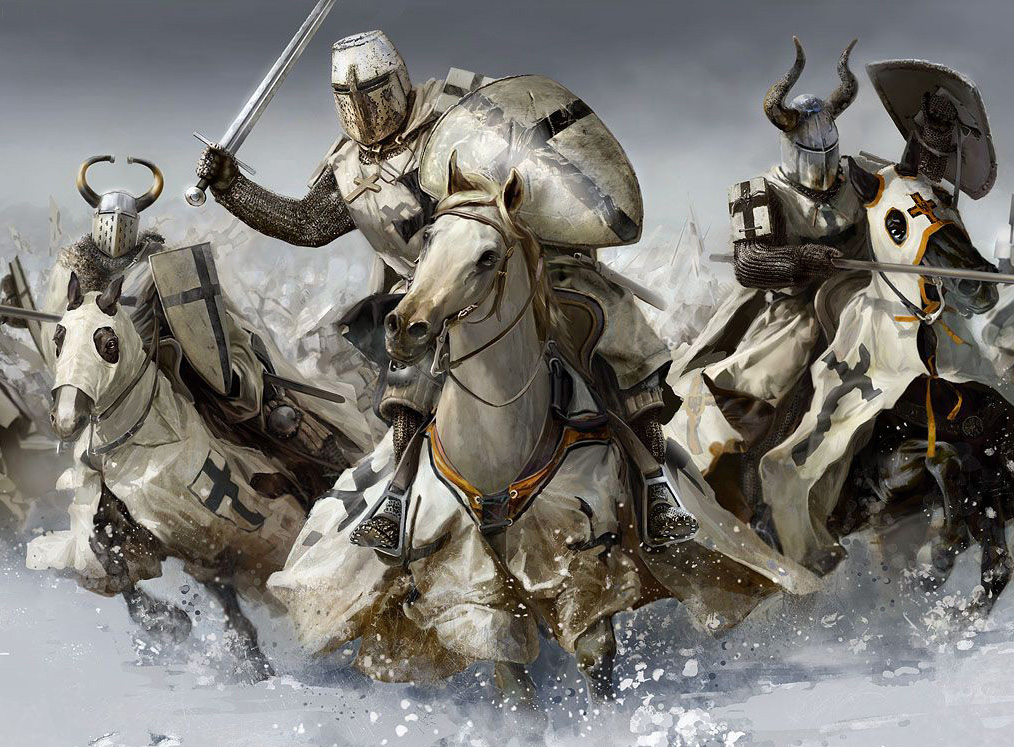 Kristene then added, “What I most enjoyed about this story was that for the majority of it I genuinely didn’t know where the plot was going or what would happen next. I’m one of those annoying people who can usually figure out the entire plot of a book or movie within the first few scenes (watching movies with me can be challenging), so to come

across a story that stumped my super CSI powers of deduction was a real treat.”

“For those in love with science fiction at its best, The Last Summoner is a complex story of ignored responsibilities and their dire consequences, of love and betrayal that span centuries and multiple worlds. Time travel, multiverse travel, immortality, alternate history in which the Nazis have won, not in the twentieth century but way earlier, in the Teutonic age. Angels and mutants, utopias and dystopias, even a Tesla occurrence— everything a science fiction reader could ever desire in a book. A masterfully told story with great characters. Nina Munteanu moves flawlessly from a medieval story to a modern one and everything in between.”—Costi Gurgu, author of RecipeArium

Jonathan, history buff and author of Sci-Fi & Fantasy Reviews , writes: “The Last Summoner is a unique story melding Germany of the 15th century and modern France, even if a different France from what we would recognize. The story centered around the very real and pivotal Battle of Grunwald in which a coalition of Polish and Lithuanian forces defeated the monastic Teutonic Knights. The book takes a look at the young 14-year-old baroness of Grunwald, someone not quite human, and how she attempts to right a wrong and get history back on track…The author is a good writer, and her wordsmithing is excellent…The historical research was outstanding…Given that this is fiction, and that two settings did not follow history as we know it, never-the-less, each event was either very accurate to our known history or made logical sense in the other settings. I am not a huge fan of alternative history books, but in this one, I was extremely caught up in the final section of the book, and I had to contemplate how the world might be different with only a few changes to our history.”

Jonathan adds, “While I was familiar with most of the historical background of the book, I was unaware of some facts, such as the Tartars taking part in the Battle of Grunwald. I thought this was a mistake made on the part of the author and went to confirm that, but in fact, the author was correct…a clever, well-written book. I would recommend it without hesitation.” The reviewer did have one quibble: my liberal use of French and German in the book.

Professional photographer and science fiction/fantasy reader, Rick LeBlanc shared that he’d “read The Last Summoner on the flight back from World Fantasy Con: could hardly put it down. Just loved the historical references of gear, place and events. The characters

were incredibly strong and involved you in their lives. The flow was fun & fast-paced. Merci, Nina. Great book!”

“I loved, loved, loved the metaphors. A page-turner that left me wanting to be Vivianne when I grew up.”—Carina Burns, author of The Syrian Jewelry Box

“The Last Summoner is an enticing fantasy exploring the Knightly order and adding many new perspectives.”—John Taylor, The Midwest Book Review