In 1963 science fiction writer Kurt Vonnegut used the fictionalized concept of ice-IX—a crystalline polymorph of ice that remains stable at room temperature—in his novel Cat’s Cradle.  Ice-nine was a form of water so stable that it never melted and would crystallize all water it touched. It was the Ebola of water…

In Vonnegut’s book, physicist Felix Hoenikker created ice-nine as a tool to help troops easily traverse mud and swamps. Unfortunately, once the process started, it could not be stopped and with a melting point of 114 degrees F, the ice wasn’t likely to melt; in a pivotal scene some of the ice-nine is introduced to the ocean, which freezes solid entirely along with the rest of the planet’s freshwater. This throws the planet into calamity and threatening the natural world with violent storms; tornadoes ravage the landscape.

With all water on Earth crystalized, locked in the Ice-Nine configuration, humanity is lost:

There were no smells. There was no movement. Every step I took made a gravelly squeak in blue-white frost. And every squeak was echoed loudly. The season of locking was over. The Earth was locked up tight.

In fact, Ice-IX does exist; it was discovered in 1968 and exits under high pressure as a tetragonal crystal lattice but without the properties of Vonnegut’s ice-nine. It forms by cooling Ice III; it has an identical structure to Ice III other than being hydrogen-ordered. According to Dr. Martin Chaplin, London South Bank University, Vonnegut’s ice-nine has no scientific basis: “The actual Ice-IX is a proton-ordered form of Ice-III, and only exists at very low temperatures and high pressures and cannot exist alongside liquid water under any conditions.” 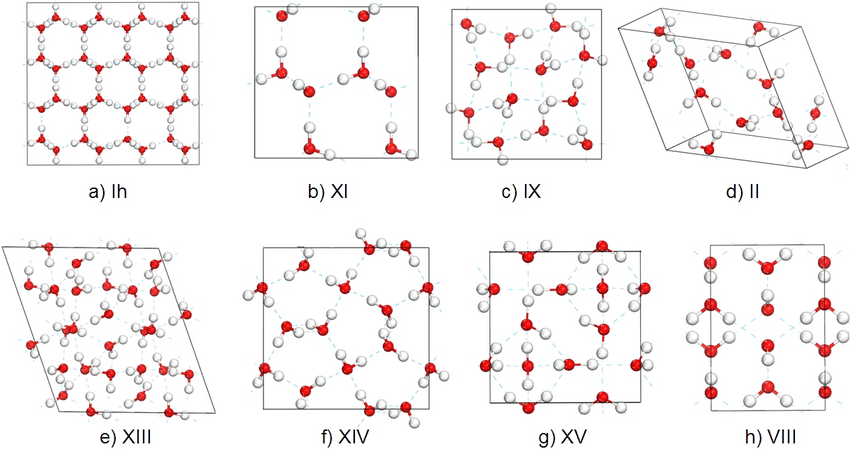 A form of Vonnegut’s Ice-IX was “created” by Harvard researchers recently through a computer simulation that shows how it might be possible for water to remain frozen at body temperature. They showed how a layer of diamond, coated with sodium atoms, kept water frozen indefinitely at up to 108 degrees Fahrenheit. The technique only works on a very thin layer of water—a few molecules thick—to successfully keep the ice structure intact. The researchers explain:

In ice, water molecules are arranged in a rigid framework that gives the substance its hardness. The process of melting is like a building falling down: pieces that had been arranged into a rigid structure move and flow against one another, becoming liquid water.

The computer model shows that whenever a water molecule near the diamond-sodium surface starts to fall out of place, the surface stabilizes it and reassembles the crystalline ice structure.

Ordinary ice—the kind we skate on—has a hexagonal structure and is called Ice-Ih. It’s the kind of crystal that forms snowflakes (which are all hexagonal). Including the hexagonal arrangement of common ice, scientists have already discovered a bewildering 18 architectures of ice crystal. At different temperatures and pressures, water forms solids that may be hexagonal (Ice Ih) rhombohedral (Ice II and Ice IV), tetragonal (Ice III and IX), cubic (Ice Ic and Ice XIc), or orthorhomboic (Ice XI) in structure. Some forms of frozen water are disordered (non-crystalline). Eighteen crystalline phases of ice polymorphs have been identified based on the structure of the molecules and atoms and their bonds.

Ice phases Ih to XV at different temperatures and pressures

Around the time that Vonnegut’s novel came out, a similar potential phenomenon of contact-induced change to water structure was discovered: polywater.

In 1961, the Russian physicist Nikolai Fedyakin discovered a new polymerized form of water. He had been measuring the properties of water which had been condensed in, or repeatedly forced through, narrow quartz capillary tubes. Some experiments revealed water with a higher boiling point, lower freezing point, and much higher viscosity than ordinary water; it had the consistency of syrup and was 40% denser and 15 times more viscous. Boris Derjaquin, director of surface physics at the Institute for Physical Chemistry in Moscow reproduced the results and used the term anomalous water. 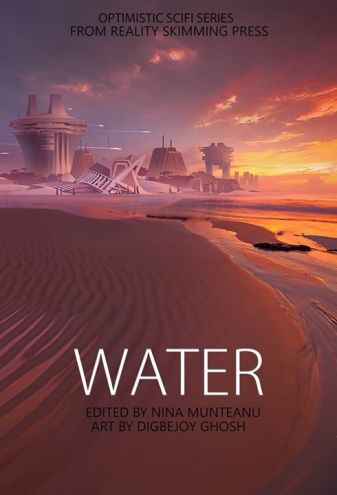 The media spread a panic about polywater-contaminated oceans of “jelly” aka Vonnegut’s novel Cat’s Cradle.

You can read a compelling version of this scenario in Costi Gurgu’s “Corrosion” in the anthology Water (Reality Skimming Press, 2017) edited by Nina Munteanu.

Subsequent analysis of polywater found that the samples were contaminated with other substances, which explained the changes in melting and boiling points due to colligative properties. Electron microscopy confirmed that the polywater also contained small particles of various solids – from silica to phospholipids, which explained its greater viscosity.

When the experiments which had initially produced polywater were repeated with thoroughly cleaned glassware, the anomalous properties of the resulting water vanished, and even the scientists who had originally advanced the case for polywater agreed it did not exist. The anomalous properties were finally attributed to impurities rather than to the existence of polymeric water molecules.

The significance of the Russian results was abandoned in the hubbub of scientific embarrassment. “Contaminants” are natural features of water, given its impeccable universal solvent characteristics, and their presence in limited quantities does not necessarily imply that observed features are not relevant to water’s behaviour. The natural question abandoned by the community was this: In the presence of contaminants, why does water take on the interesting features described by Derjaguin’s team? Earlier work by Henniker and Szent-Györgyi had established that water organized itself close to surfaces such as cell membranes.

This was later demonstrated by Gerald Pollack and his team at the University of Washington. Forty years after the polywater debacle, Pollack and other scientists discussed a fourth phase of water, an interfacial water zone that Pollack calls Exclusion Zone water or EZ water, given that it excludes materials. Interfacial EZ water was more stable, more viscous and more ordered, and according to biochemist Martin Chaplin of South Bank University this water was, “hydrophobic, stiffer, superfluidic and thermally more stable than bulk water.” While Chaplin discounts Pollack’s suggested structure for EZ-water (as nonsense), he acknowledges the existence of EZ-water, which forms a liquid ‘phase’ that can be legitimately treated as different from ‘bulk’ liquid water.

Not the same as “polywater” but certainly related. And questions remain.

Recently, the Laboratory for Laser Energetics in Brighton, New York, blasted a droplet of water that created a shock wave, raising the water’s pressure to millions of atmospheres and temperature to thousands of degrees. The water atoms inside the shock wave didn’t form superheated liquid or gas; they froze solid into crystalline ice—something called “superionic ice,” a new phase of water with weird properties. It’s black and hot. And weighs four times as much as normal ice.

According to Joshua Sokol of Quanta Magazine, scientists suggest that this black hot ice may be the universe’s most common form of water. Superionic ice fills Uranus and Neptune and comprises the bulk of giant icy planets throughout the universe.

Gas giants in our solar system

Superionic ice nearly as hot as the sun

All the previously known water ices are made of intact water molecules, each with one oxygen atom linked to two hydrogen atoms. But superionic ice, the new measurements confirm, isn’t like that. It exists in a sort of surrealist limbo, part solid, part liquid. Individual water molecules break apart. The oxygen atoms form a cubic lattice, but the hydrogen atoms spill free, flowing like a liquid through the rigid cage of oxygens.

Because its water molecules break apart, said physicist Livia Bove of France’s National Center for Scientific Research and Pierre and Marie Curie University, it’s not quite a new phase of water. “It’s really a new state of matter,” she said, “which is rather spectacular.”

Sokol tells us that computer simulations led by Pierfranco Demontis in 1988 predicted “water would take on this strange, almost metal-like form if you pushed it beyond the map of known ice phases.” Atoms in the water had rearranged into the long-predicted but never-before-seen architecture, ice XVIII: a cubic lattice with oxygen atoms at every corner and the center of each face. “It’s quite a breakthrough,” Coppari said. 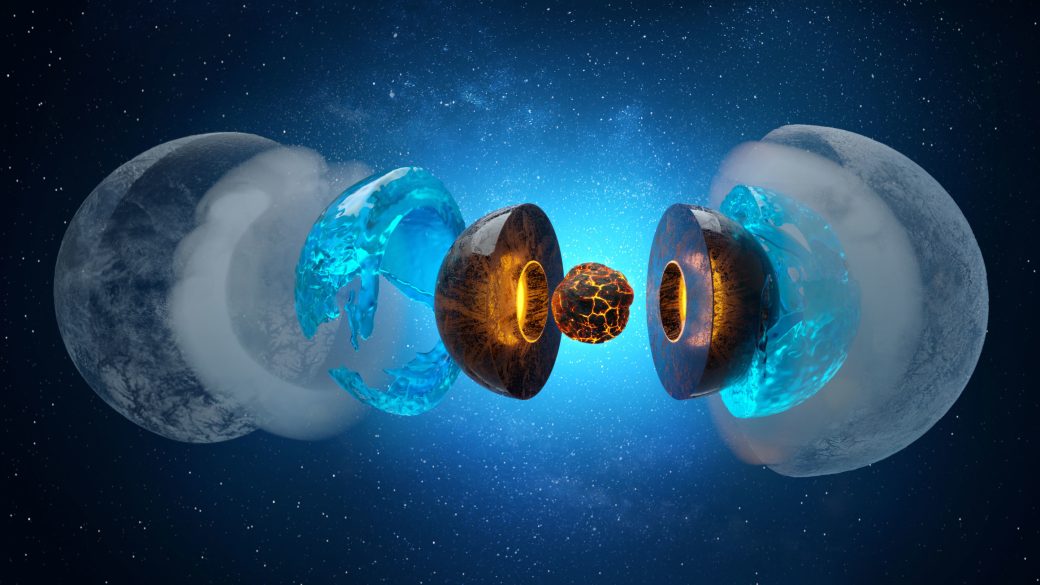 The simulations showed that under extreme pressure and heat water molecules break. With the oxygen atoms locked in a cubic lattice, “the hydrogens now start to jump from one position in the crystal to another, and jump again, and jump again,” Millot said. The jumps between lattice sites are so fast that the ionized hydrogen atoms act as positively charged protons and appear to move like a liquid.

This suggests that superionic ice might conduct electricity, like a metal, with the hydrogens acting as electrons. “Having these loose hydrogen atoms gushing around would also boost the ice’s disorder, or entropy. In turn, that increase in entropy would make this ice much more stable than other kinds of ice crystals, causing its melting point to soar upward,” writes Sokol, and continues:

Other planets and moons in the solar system likely don’t host the right interior sweet spots of temperature and pressure to allow for superionic ice. But many ice giant-sized exoplanets might, suggesting that the substance could be common inside icy worlds throughout the galaxy.

No real planet contains just water. The ice giants in our solar system also mix in chemical species like methane and ammonia. The extent to which superionic behavior actually occurs in nature is “going to depend on whether these phases still exist when we mix water with other materials,” Stanley said. So far, that isn’t clear, although other researchers have argued superionic ammonia should also exist.

One thought on “Vonnegut’s Ice-Nine and Superionic Ice”