I recently attended the inaugural festival of the Limestone Genre Expo (July 25, 2015) for writers in Kingston, Ontario. The festival gets its name from the city’s moniker, based on the many heritage buildings constructed there using local limestone.

It would have been a very long trip from my digs in Nova Scotia; but I’m currently in Toronto, teaching writing at UofT and George Brown College. I still had to get up earlier than I normally do to get to the 1-day festival that started at ten in the morning.

It was worth it.

Organizers Liz Strange, Barry King, Delina MacDonald and Marlene Smith nailed everything right. Being the first of hopefully many more, this writers’ festival wisely started small. But, like the good Doctor’s tardis, the venue belied its size by being dense with quality and diversity.

The Ongwandada Resource Centre, where the festival was held, had lots of parking with a friendly well-lit ambience inside under an atrium with tables and chairs for gathering and several rooms for panels and workshops.

The festival covered several of the major genres such as fantasy, science fiction, horror, romance and mystery, with representation by well-known authors in each. Organizers offered a triple track program from 10 am to 5 pm that included panels, informative workshops, readings, novel pitch sessions with CZP

and Bundoran Press and first page critiques with Caro Soles. Festival organizers populated their program with well-established writers from their own communities. Readers of genre fiction and writers looking to learn and network were given the opportunity to meet some of the top genre writers in the region. The venue included a book fair, box lunches and a snack stand. The only thing missing was a primo coffee bar. 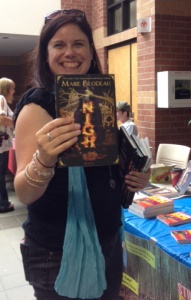 The small venue provided an intimate setting for great networking. I had a chance to meet many of my old friends and to make new ones. Marie Bilodeau, an Ottawa fantasy writer, gave an exquisite reading of her new series “Nigh”. Alison Sinclair, recently moved to Ottawa, beamed as she showed me the new release of her Eyre series, “Contagion” by Bundoran Press. Aurora-winning short story author Douglas Smith gave

an informative workshop on how to market and sell your short stories. His excellent guidebook “Playing the Short Game” sold for a special festival price. I caught Derek Newman-Stille sitting in the lounge over a box lunch and discussed his radio show in Peterborough and traded stories with Hayden Trenholm, publisher of Bundoran Press and aurora-winning author of the Steeles Chronicles. Other writers who I had a chance to visit 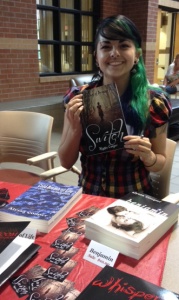 The organizers—themselves published genre writers (Strange writes fantasy, horror and mystery and just released her first science fiction novel, “Erased”; King writes science fiction)—started the festival in response to an observed need to showcase genre writers in the Kingston area, otherwise rich in non-genre writing festivals. “Kingston is in an interesting position because we do have so many writers and we do have the WritersFest and so on,” explained King to Peter Hendra of the Kingston Whig-Standard. King felt there was room to showcase this literature in Kingston and the surrounding area.

“I find that genre fiction can sometimes be seen on a lower status as ‘literary fiction’, and that stings,” Strange confided to me. “I thought [the LGE] would succeed because there are not that many festivals of this sort, and after we put feelers out to see who might be interested in attending the positive responses were overwhelming.”

Strange added that “nerd culture” these days is more mainstream than in the past, thanks to George R.R. Martin’s Game of Thrones and Stephanie Meyer’s Twilight series. Strange concluded that this is a good thing for writers of romance, sci-fi, horror, mystery and fantasy and observed that genres are blending a lot more (e.g., historical fantasy, paranormal romance, etc.). I personally write mostly blended genres: science fiction thrillers; SF eco-fiction; historical fantasy and romantic SF.

I asked Strange for her opinion on whether the festival was a success and what the organizers plan to do for next year. She gave a resounding yes; they had double the numbers they’d hoped for and didn’t lose money (a common challenge with writing festivals). With most events tending to be in spring or fall, they chose summer, which worked well and showed off Kingston.

Based on the feedback and success of the con, it looks like the festival next year will run two days.