But I was in the general area for another reason: to meet my son and his lady for a wonderful meal in the exquisite Italian restaurant Autostrada Osteria; a Christmas present he’d owed me since COVID hit. Located on the corner of Homer and Pender streets, Autostrada Osteria nestles comfortably in an eclectic mix of old and slightly dilapidated next to trendy and posh chic. Something Vancouver seems to do well.

I was a little early for our reservation at 7:15 pm, so I wandered down the street. Immediately east of the restaurant was a character bookstore selling new and used books, The Paper Hound Bookshop. It’s located in the Victoria Block, a 1908 addition to the old boutique Victorian Hotel.

I nodded to the young woman at the front desk who exuded friendly intelligence through kind but impish eyes. I ventured deeper, perusing the shelves, high and low. I noted that the books were arranged with lots of front covers on display in tiny category-labeled alcoves that literally covered the walls from floor to ceiling. Several sliding ladders were judiciously placed to provide reach. The categories were odd, bizarre, somewhat arcane, and peculiarly amusing. There was one that proclaimed “Rodent as Hero.” Another read “Indomitable Orphans,” (populated with several Harry Potter books, of course, as well as other lesser known orphans).

Whoever had created these categories—was it the woman at the front?—was either strange or had purposefully flouted the norm to draw attention to a more whimsical, curious way of seeing the world and the books that described it. No mundane alphabetizing within broad normative categories for these people!

As I wandered the labyrinthine rows of books, the place felt like a roadmap to another world. The narratives from the categories alone were worth studying from “Hot Adventure”, “Cold Adventure,” and “Wet Adventure” to “Books with Bears,” “Detection / Deduction,” and “Wanderlust.” Each category was a ‘book’ and each book ‘a chapter’ of a larger funky narrative that depicted one person’s intriguing interpretation of the world.

Keagan Perlette of Sad Mag describes the store this way: “The Paper Hound stocks both used and new books and features an impressive collection of poetry and philosophy. Space is limited, so there is an evident focus on literature, but there are surprises hidden in the shelves: an excellent selection of beautiful children’s books, art books, drawers full of zines and chapbooks, and even a section for unique vintage cookbooks. The store is full of little wonders.”

There is even a funky machine that dispenses poetry like cigarettes for two quarters at the front of the store. Even on its surface books were stacked. The owners had stacked books literally everywhere. On chairs, on tables, on each other. Little books on larger books, balanced wonderfully in a kind of fanciful ordered chaos.

Owners Kim Koch and Rod Clarke are veterans of the bookstore world in Vancouver, having worked at several before opening Paper Hound. They set up The Paper Hound in the old boutique hotel in 2013 on what my book collector friend calls ‘book row.’ Located on Pender Street, between Richards and Hamilton, ‘book row’ is apparently expanding according to On the Grid.  According to the Vancouver Sun: “in this digital age many people think bookstores are on the verge of extinction. People are buying fewer paper books, and websites like Amazon offer almost anything ever printed, often for cheap.” While the Internet and digital devices appear to be ravaging large chain bookstores (some like Borders closed and others like Indigo have added household goods to bring people into the store), small niche independent bookstores are flourishing.

“Setting up a bookstore in the post-online and big book retailer age is sort of liberating,” says Kim. “We know we can’t carry everything or nearly as many titles as they do, so that liberates us to instead focus on creating the experience we want the customer to have.” Kim describes the perfect bookstore as: “a place that offers people a space where they can explore, get guidance from the proprietors and, when they want to, be left alone amongst the shelves to daydream.”

That’s exactly what I did.

When I left the store at shortly after 7pm, Kim pulled in the book trolley from outside in preparation to close and I apologized if I’d held her up a few minutes. She then informed me that they usually close at six but she had kept the store open for goodness knows why. I smiled and said rather cheekily with sudden inspiration, “I know; because I needed to experience it.” She laughed and those impish eyes twinkled.

And before you ask, yes, I did walk away with something: “Water Babies” by Charles Kingsley, a moral fable that explores the closed-minded approaches of many scientists of the day in their response to Charles Darwin’s ideas on evolution.

After he is chased from the home of an upper-class young girl, chimney-sweep Tom falls asleep and tumbles into a river. There he is transformed into a ‘water-baby’ and his adventures truly begin. Beneath the surface, he enters a magical world full of strange and wonderful creatures, where he must prove his moral worth in order to earn what he truly desires.

“One of the most unusual children’s books ever written, The Water-Babies, subtitled ‘A Fairy Tale for a Land-Baby’, was originally intended as a satire in support of Charles Darwin’s On the Origin of Species, and explores the issues at the forefront of biologists’ minds at the time. First published as a complete novel in 1863 [originally illustrated by Linley Sambourne], Charles Kingsley’s classic tale also explores ideas about religion, the Victorian education system and the working conditions of children and the poor.”

The vintage version I picked up at The Paper Hound was illustrated by Harry G. Theaker and published in 1935 by Ward, Lock & Co. Ltd. with 24 colour plates.

For a great taste of Kim and Rod’s unique vision of the world of literature and their pithy humour and wit, go to their blog The Paper Hound. Here’s a taste:

NINA MUNTEANU is a Canadian ecologist / limnologist and novelist. She is co-editor of Europa SF and currently teaches writing courses at George Brown College and the University of Toronto. Visit  www.ninamunteanu.ca for the latest on her books. Nina’s bilingual “La natura dell’acqua / The Way of Water” was published by Mincione Edizioni in Rome. Her non-fiction book “Water Is…” by Pixl Press(Vancouver) was selected by Margaret Atwood in the New York Times ‘Year in Reading’ and was chosen as the 2017 Summer Read by Water Canada. Her novel “A Diary in the Age of Water” was released by Inanna Publications (Toronto) in June 2020.

Banyen Books and Sound, Vancouver, BC (photo by Nina Munteanu)

When I lived in Vancouver—raising my family, consulting for the environment and teaching limnology—I often visited my favourite bookstore in town: Banyen Books & Sound on 4th Avenue in Kitsilano. It was a bookstore like no other, I thought. Spacious with comfortable chairs to read, the bookstore became a destination and an experience in discovery for me.

A customer browses “Water Is…” in Banyen Books

In fact, since opening in 1970 Banyen Books has become Canada’s most comprehensive metaphysical bookstore, offering a broad spectrum of resources from humanity’s spiritual, healing, and earth wisdom traditions. Here is how they put it:

Banyen is an oasis, a crossroads, a meeting place… for East and West, the “old ways” and current discoveries and syntheses. Our beat is the “Perennial Philosophy” as well as our evolving learning edges and best practices in a wide variety of fields, from acupuncture to Zen, from childbirth and business to the Hermetic Mysteries, from the compost pile to the celestial spheres. We’re “in the philosophy business,” on “a street in the philosophy district” (as an old cartoon wagged). We welcome and celebrate the love of wisdom, be it in art, science, lifecraft, healing, visioning, religion, psychology, eco-design, gardening… Our service is to offer life-giving nourishment for the body (resilient, vital), the mind (trained, open), and the soul (resonant, connected, in-formed). Think of us as your open source bookstore for the “University of Life”.

I had long harboured romantic notions of one day seeing my own book on one of their shelves. I must have sent a compelling message to the universe, because in Autumn of 2018, this incredible bookstore agreed to carry “Water Is…”

When I mentioned about my book being at Banyens Books, my son Kevin visited the bookstore and soon found “Water Is…” among a variety of other “savoury books”; he admitted a need for strength not to walk out of the bookstore with an armload of books. This has been my experience too.

Anne, one of the directors of Pixl Press, visited the bookstore with her friend Jackie from out of town. After browsing the bookstore, they walked across the street to Aphrodites Pies and enjoyed their signature organic peach pie. 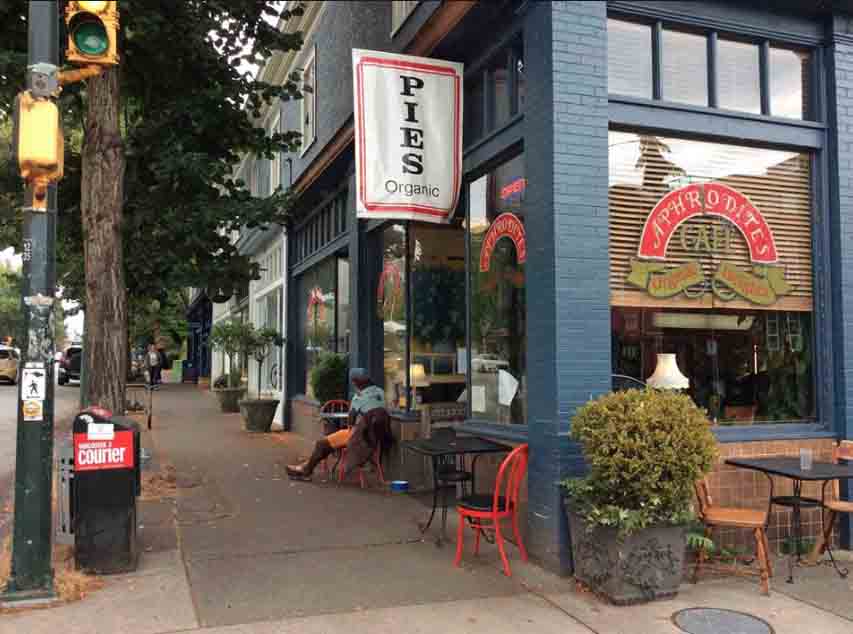 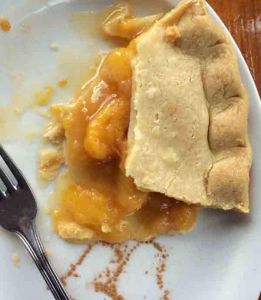