A while ago I was approached by Robert Gooding-Townsend, Science in Society editor for Science Borealis for my opinion on a persistent idea that post-Star Trek sci-fi is more pessimistic and less technologically imaginative. I wanted to provide for you my full response here, given that the article couldn’t include all of it. You can read the Science Borealis article here, with comments from several authors, including me.

Below is my full response:

Whether this perception is true I can’t definitively say but there is a reason behind it, which I believe reflects a subtle shift in our cultural paradigm and worldview in the past decades since Star Trek. A shift involving a growing awareness of ecology and the emergence of the “feminine archetype” in storytelling.

I think two things are happening in concert: science fiction is maturing as a genre: 1) in its actual breadth; but also 2) in our perception of it.

Our shifting worldview, along with science fiction’s gradual blending with strong literary elements is reflected in a perception of higher pessimism with less focus on technological “wonders”. When asked to describe SF today, colleague Lynda Williams, author of the Okal Rel series, argued that, “SF is mainstream now … It has grown up, emotionally, from being about wish-fulfilling technologies … to embracing the social implications of change.”

Today, SF is recognized more as “real” literature rather than being dismissed as “escapism.” Williams shares that SF’s roots are as old as myth. “Like myths and bible stories, SF is an instructive literature, pointing out how things can go wrong (or right) and why. The growing up SF has done since the 1950s lies in an increasing recognition that [humanity is its] own worst enemy and a better understanding of human nature is crucial to the problems we face, not just the hard sciences.”

For the past few years I’ve been following a trend in the science fiction writing courses I teach at university: more and more students (male and female) are bringing in WIPs on ecological and global environmental issues. Many of the stories involve a premise of environmental calamity, but not in the same vain as previous environmental disasters that depict “man” against Nature. These works give the Earth, Nature or Water an actual voice (as a character). And a protagonist who learns to interact with it cooperatively. For me this represents a palpable and gestalt cultural awakening in the realm of the “feminine archetype”. One that is focused more on the sociological and ecological consequences of humanity’s evolution.

Stories of doom and gloom have populated the science fiction genre since its inception. What appears to be changing is the increased sophistication of this assessment and humanity’s place—and technology’s place—in it. Editor and Publisher of On Spec Magazine, Diane Walton shares that she is seeing a lot of Post-Apocalyptic submissions, “mainly because it’s interesting to put your characters in a setting where the rules don’t apply any more. They have to try to rebuild the life and security and order they used to have, or else revert to savagery, or else adapt to a whole new set of circumstances.”

Environmental fiction has been written for years. But I believe that now—partly with new awareness of climate change and with the genesis of the term eco-fiction—the “character” and significance of environment is being acknowledged beyond its metaphor, for its actual value. It may also be that the metaphoric symbols of environment in certain classics are being “retooled” through our current awareness, much in the same way that Aldous Huxley’s Brave New World or George Orwell’s Nineteen Eighty Four are being re-interpreted—and newly appreciated— in today’s world of pervasive surveillance and bio-engineering.

The stories I’m seeing more and more—whether by established writers or by my own students—reflect an emerging worldview of participation, responsibility and accountability. It is the worldview of Jung and synchronicity; of David Bohm and “implicate order”; of Rudolf Steiner and “cosmic intelligence”, of biochemist Mae-Wan Ho and “quantum entanglement”, of Frans de Waal and “empathy”, and of Matt Ridley and “altruism”. 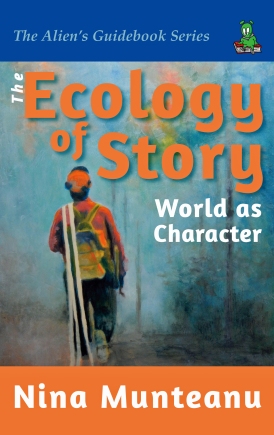