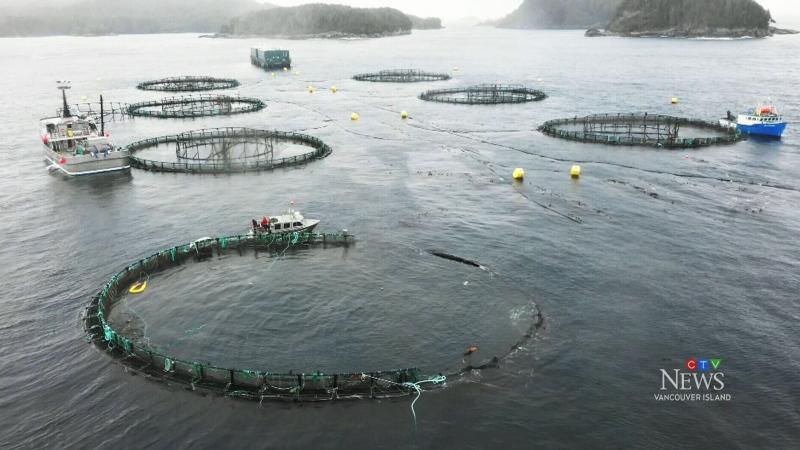 I was dismayed by a recent news story on CTV on the escape of farm fish into native fish waters. I was dismayed for two reasons: 1) the ecological impacts of this accident; and 2) the failure of CTV in appropriately reporting the seriousness of it.

In late December 2019, a fire at the Mowi fish farm in BC waters near Port Hardy resulted in the escape of over twenty thousand Atlantic salmon. The news story by the CTV media proved biased, incomplete and erroneous—and ultimately dangerous—in its reporting.

CTV targeted “environmentalists and indigenous groups” as worried that “it could have devastating impacts on [Pacific] wild salmon…Escape presents ecological and environmental risks to an already fragile wild salmon population.” But CTV failed to include concerns by environmental scientists in this matter: government or academics with real expertise and authority.

CTV talked to some “so-called” experts to counter the position of the environmentalists. This included comments by a vet (Dr. Hugh Mitchell), who works for the fish farm: “[Atlantic salmon] are brought up on prepared fish pellets from since they start feeding …They don’t know how to forage. They don’t know how to find rivers and reproduce. They get eaten by predators or they die of starvation after they escape.” (see below for proof against this). A vet (who will have some expertise in fish physiology and biology) does not have the same expertise as a fish population biologist, oceanographer, ecologist or geneticist—all of who would better understand the potential impact of released exotic species to native species in a region. But CTV didn’t interview any of these experts. Instead, they interviewed a vet who works for the farm. CTV ends its story with a remark by the managing director of Mowi who said, “Data would suggest there’s a very low risk to the [Atlantic] salmon making it to any rivers and an even lower risk of them establishing successful populations within the BC environment.”

But where’s the data to prove this? And who provided it to Mowi? CTV fails to mention that or show any of “the data”.

This is clearly careless reporting that provides no substantiation for the claims made by Mowi; nor does CTV provide a more robust inquiry into potential risks. Risks posed by more than Atlantic salmon just outcompeting native fish; risks posed by disease and other indirect challenges to native fish—not addressed by Mitchell and Mowi.

CTV provided no statement by DFO scientists or academia. Where were the UBC or UVic scientists? Why weren’t these unbiased authorities consulted for their expertise instead of a vet who works for the aquaculture industry? This is very sloppy reporting. 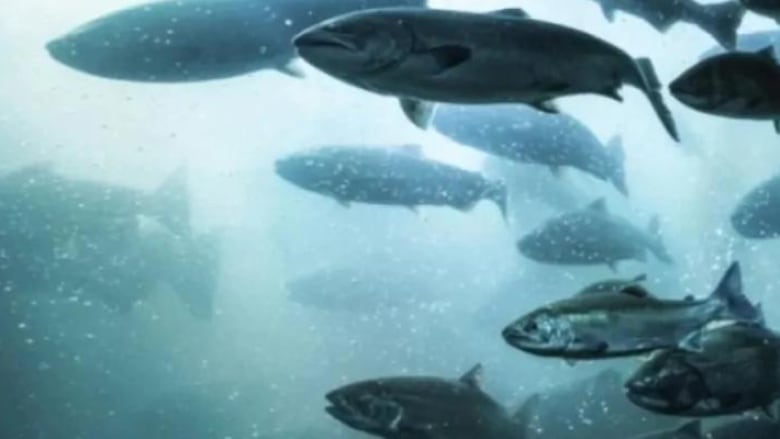 The Vancouver Sun, which also covered this story, showed a little more balance in its reporting. However, when it came time for the Sun to report on DFO’s response, it was less than clear: “Among the feedback the federal government has received through early consultations on the legislation is a need for a more effective risk management framework and support for Indigenous involvement and rights in the sector, it says.”

The Georgia Straight used the right word—claimed—to describe Mowi’s unsubstantiated statements: “The company claimed that the escaped fish are easy prey because they are ‘unaccustomed to living in the wild, and thus unable to forage for their own food.’” The Straight also balanced that claim with another by Ernest Alfred of the ‘Ngamis First Nation and videographer and wild-salmon advocate Tavis Campbell, who suggested that the presence of Atlantic salmon in ocean water “presents a serious threat to native Pacific salmon through transfer of pathogens and other associated risks”. The Straight then followed up with some relevant historic precedence: “After a large number of Atlantic salmon escaped from a Washington state fish farm near Bellingham in 2017, these species were found as far away as the Saanich Inlet and Harrison River.” Hardly the weaklings described by Mowi and Mitchell… 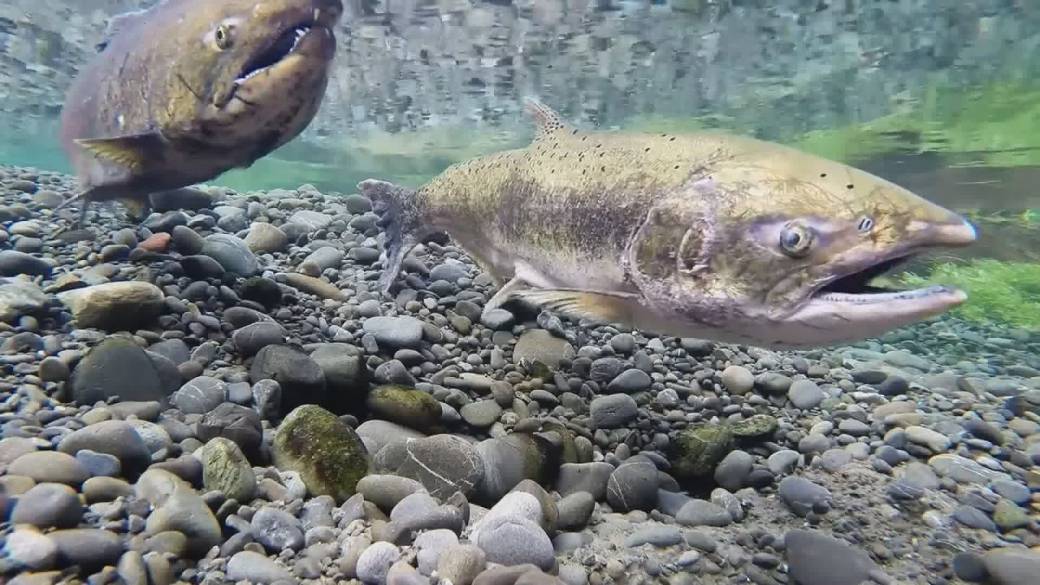 “Up to 263,000 invasive Atlantic salmon escaped into Puget Sound, raising fears about the impact on native Pacific salmon runs. The incident inspired Washington state to introduce legislation that would phase out marine farming of non-native fish by 2022. Groups like the Pacific Salmon Foundation have called for the B.C. and federal governments to do the same in Canada.”

Wild Pacific salmon have been declining for decades off the BC coast and streams. Human interference is primarily responsible, which includes habitat destruction, diversions for agriculture and hydro-power, and climate change. Habitat destruction—both quantity and quality—has occurred mainly from logging, road construction, urban development, mining, agriculture and recreation. Added to that list is the aquaculture industry that uses Atlantic salmon, an exotic to the Pacific Ocean.

A recent study conducted by the Strategic Salmon Health Initiative (SSHI) revealed that the piscine reovirus (PRV) found in farmed Atlantic salmon is linked to disease in Pacific Chinook salmon. The SSHI is an initiative made up of scientists from the Department of Fisheries and Oceans (DFO), Genome B.C., and the Pacific Salmon Foundation (PSF).

The findings show that the same strain of PRV, known to cause heart and skeletal muscle inflammation (HSMI) in farmed Atlantic salmon, is causing Chinook salmon to develop jaundice – anemia, a condition that ruptures red blood cells, and causes organ failure in the fish. The disease could cause a serious threat to wild salmon migrating past open-net fish farms in coastal waters in B.C.

In B.C., concerns about the decline of Pacific salmon have already risen to peak levels after the Big Bar landslide in the Fraser River near Kamloops; scientists say this could result in the extinction of multiple salmon runs by 2020. The federal Liberal government has pledged to transition BC’s open-net pen salmon farms to closed inland containment systems by 2025.

All this corroborates the serious risk of Atlantic salmon farming. Accidents must be expected to happen. They always do. Risk analysis must include the certainty of this inevitability—just as water engineers must account for 100-year storms, which do happen.

The scientific method relies on accurately measuring certainty and therefore reliably predicting risk. This means accounting for all biases and errors within an experiment or exploration. In my work as a field scientist and environmental consultant representing a client, we often based our formal hypotheses in statistics, which considered two types of error: Type I and Type II errors. Type I errors are false positives: a researcher states that a specific relationship exists when in fact it does not. This is akin to an alarm sounding when there’s no fire. Type II errors are false negatives: the researcher states that no relationship occurs when in fact it does. This is akin to no alarm sounding during a fire.

The reason why remarks made by vet Mitchell and Mowi are so dangerous is because they make assumptions that are akin to not sounding an alarm when there is a fire; they are committing a Type II error. And in risk assessment, this is irresponsible. And dangerous.

Instead of targeting “environmentalists” “activists” and certain groups for opinions on issues, I strongly urge CTV and other media to seek out evidence-based science through scientists with relevant knowledge (e.g. an ecologist—NOT an economist or a vet—for an environmental issue). My advice to Media: DO YOUR HOMEWORK AND GET THE FACTS STRAIGHT! You need to talk to academics and scientists with no ties to perpetrators and with relevant knowledge on the topic in question.

The Need for The Precautionary Principle in Environmental Science and Reporting

Environmental scientists generally pride themselves on the use of the Precautionary Principle when dealing with issues of sustainability and environmental management. According to the Precautionary Principle, “one shall take action to avoid potentially damaging impacts on nature even when there is no scientific evidence to prove a causal link between activities and effects.” The environment should be protected against substances (such as an exotic species) which can be assumed potentially harmful to the current ecosystem, even when full scientific certainty is lacking.

Unfortunately, politicians, engineers and the scientists who work for them tend to focus on avoiding Type I rather than Type II statistical errors. In fact, by traditionally avoiding Type I errors, scientists increase the risk of committing Type II errors, which increases the risk that an effect will not be observed, in turn increasing risk to environment.

In describing the case of the eutrophication of a Skagerrak (a marine inlet), Lene Buhl-Mortensen asks which is worse: risk a Type II error and destroy the soft bottom habitat of Skagerrak and perhaps some benthic species, or risk a Type I error and spend money on cleaning the outfalls to Skagerrak when in fact there is no eutrophication? “Scientists have argued that cleaning up is too expensive and should not be done in vain,” writes Buhl-Mortensen. “But more often the opposite is the case. The increased eutrophication of Skagerrak could end up more costly than reducing the outfalls of nutrients [to the inlet].”

“Because threats to the environment are threats to human welfare, ecologists have a prima facie ethical obligation to minimize Type II errors,” argues Buhl-Mortensen in the journal Marine Pollution Bulletin. Use of the precautionary principle will save costs—and lives—in the end.