My detective thriller trilogy “The Splintered Universe,” which came out in print and ebook format in 2012-2014 were made into audiobooks by Iambik in 2019 and narrated impeccably by voice artist Dawn Harvey. When Iambik closed its doors, Spoken Realms and Pixl Press picked up the trilogy and reissued them in 2022. They are now remastered and available for purchase. Canadian author Simon Rose recently interviewed me about the re-release of The Splintered Universe Audiobooks. Part of that interview appears below. For the entire interview find the link below.

I had the pleasure recently of talking with Canadian author Nina Munteanu about the new release of her audiobook set The Splintered Universe Trilogy. Nina is a scientist (limnologist) who also writes science fiction and fantasy with a focus on eco-fiction and climate fiction. She has nine novels and five non-fiction books published, including “Water Is…” recommended by Margaret Atwood as her #1 choice in the New York Times ‘Year in Reading’ in 2016.

The Splintered Universe Trilogy follows the thrilling adventures of Galactic Guardian Rhea Hawke, human detective who must save a world she hardly understands. It’s full of exciting planets, space travel, tall secrets, intrigue and even some romance. I interviewed Nina in 2019 about the trilogy when the three formats first became available and we talked about her world building, Rhea Hawke’s cool arsenal of gadgets and weapons, and concepts of metaphysics, existentialism and identity. So, what’s happening with all that now?

Simon: So, tell us about these new releases.

Nina: You’re right, Simon, the audiobooks of the trilogy did all come out in 2019, completing the three formats of print, ebook and audiobook. I was over the moon. What we’ve done recently is remaster the audiobooks and we’re now selling them as a package through the new publishers, Spoken Realms (first two audiobooks) and Pixl Press (third audiobook).

Briefly, the trilogy follows our intrepid (though slightly misguided) detective Rhea Hawke as she tries to solve the genocide of a spiritual sect on some backwater planet. She bungles her mission by killing her only lead and instead discovers a conspiracy to exterminate humanity by an alien race only she thinks exists. It goes downhill for her from there. She gets fired and her sentient ship—her only friend—is impounded. Her whole life comes apart. Her only chance to rebuild it is to prove that her discovery is true. That leads her down a rabbit hole into a dangerous world of intrigue, full of unsavory shape-shifting characters, dust smuggling, giant flying crustaceans, amorous toxic plants, and portals into mirror universes.

Rhea’s inventiveness gets her into even more trouble. She gained some notoriety with her created weapon, the MEC (short for Magnetic-Electro-Concussion) pistol, a versatile wave-weapon that can target DNA signatures and do almost anything you want with a single sweep. Her proprietary MEC design—coveted by shady crime syndicates and her own Guardians alike—becomes the centre piece to a universal war.

“An addictive start to the trilogy”–BOOK ADDICT

Simon: What makes these new audiobooks so special?

Nina: What makes these audiobooks special lies ultimately in their narration. When the original audiobook publisher took on the books as audiobooks, they provided me with three voice artists to audition. I chose Dawn Harvey because I could visualize my main character through her voice. Given that the entire trilogy is told in the first person, the narrator’s voice had to be just right. Dawn’s voice is dark and sultry like coffee. It is sexy and irreverent with a hidden vulnerability and sensitivity that perfectly captured the main character, Detective Rhea Hawke. What I didn’t realize then was how well Harvey would represent the thirty-odd other characters, mostly aliens—one who spoke through several mouths.

“Rhea is a fascinating character from the start and she continues to grow throughout the tale.”–DAB OF DARKNESS

Simon: Tell us about this narration process of the audiobooks.

Nina: Dawn is a dedicated professional. Working with her was an absolute pleasure. She created unique and consistent voices for the books many characters. She ensured that each character had the appropriate vernacular, tone, accent and cadence. She did proofs and confirmed them with me. She also tackled the “alien” vocabulary; many are made-up words. Dawn literally breathed life into Rhea Hawke and all the other characters. When I first listened to the Outer Diverse audiobook in the car on my way to Nova Scotia, I lost myself in her storytelling and forgot that I’d written it.

Here’s what one Amazon review said: “Dawn Harvey breathed incredible life into the lead character, Rhea Hawke—both sarcastic and vulnerable at the same time; a detective with a cynical edge, and sultry voice tinged with wiry sarcasm. The story unfolded through Rhea’s narrative like an old film noir as she unraveled mysteries that led to the greatest one: her own.”

Martha’s Bookshelf wrote: “Ms. Harvey manages to enthuse the personality of the characters into each voice. The wise, gentle Ka has a soft, strong sound that reminds you of a wise old bird. Shlsh She She, a slippery, slimy creature has a slurry, garbled voice like a mouthful of mushy, wet food. Dawn’s reading conveys the loneliness in Rhea, the sexiness of Serge, the frustrated friendliness of Bas, and the faithful coziness of Benny. She is able to bring emphasis to the action or romance, weariness or fear elements of the story. The narration never takes over the story; but rather enhances it.”

“An explosive ending … such a great series!”–LILLY’S BOOK WORLD

Simon: What has been the reception to the audiobooks so far?

Nina: the reception has been wonderful and overwhelming.

Dab of Darkness says: “There’s so much I have enjoyed about this series so far … There’s her AI ship, Benny, her sentient great coat, her special made gun, and her own hidden shapeshifting abilities. Then there’s a cast of interesting characters, good guys and bad guys. I love that I don’t know how things will turn out; the plot keeps me guessing.”

One Goodreads review wrote: “Rhea Hawke is a Galactic Guardian, and I love to say her name. Her name alone lets you know that there is a bad ass super hero of a woman on site. I can picture her boots, her great coat, and her side arms. I want to be her when I grow up.”

Simon: Where can people buy The Splintered Universe Trilogy?

Nina: The trilogy can be purchased at most of the usual places in print and ebook formats. These include Amazon all over the world, Kobo, iBooks, Barnes and Noble and other quality retailers.

The audiobooks of the trilogy are available through Audible. The links on Audible for the three audio books are as follows: Outer Diverse, Inner Diverse, Metaverse.

Nina Munteanu is a Canadian ecologist / limnologist and novelist. She is co-editor of Europa SF and currently teaches writing courses at George Brown College and the University of Toronto. Visit www.ninamunteanu.ca for the latest on her books. Nina’s bilingual “La natura dell’acqua / The Way of Water” was published by Mincione Edizioni in Rome. Her non-fiction book “Water Is…” by Pixl Press(Vancouver) was selected by Margaret Atwood in the New York Times ‘Year in Reading’ and was chosen as the 2017 Summer Read by Water Canada. Her novel “A Diary in the Age of Water” was released by Inanna Publications (Toronto) in June 2020.

Author, writer, coach and consultant Simon Rose interviews Nina Munteanu about The Splintered Universe Trilogy, now out in three formats: print, ebook, and audiobook. Listen to a sample from each of the trilogy audiobooks on Audible:

Here’s Simon’s interview with me: 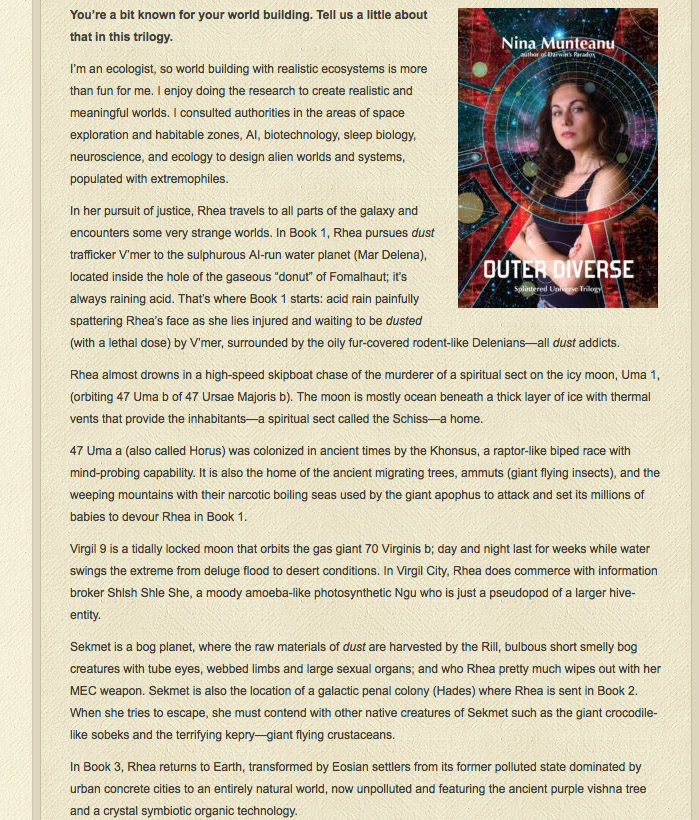 In Metaverse, the third and last book of The Splintered Universe Trilogy, Detective Rhea Hawke travels back to Earth, hoping to convince an eccentric mystic to help her defend humanity from an impending Vos attack—only to find herself trapped in a deception that promises to change her and her two worlds forever.

You can listen to a sample recording of Outer Diverse, Inner Diverse, and Metaverse through Audible.